Hello and thanks for tuning in to Mailbox. Today it’s finally time to disclose the identity of last month’s mystery man, the Brno-born mathematician and logician. We again received a great many correct answers, among them this one from Hans Verner Lollike from Denmark:

“I am quite sure, that you are asking for the late Professor at Princeton University, Kurt Friedrich Gödel. I should have known his name since I once briefly studied the philosophy of numbers, before I went for theology.”

“Kurt Gödel is the mathematician you are asking for, I remember some professors who talked to us when I was a university student, they spoke about his insightful way of thinking, the supreme importance of his ideas in modern mathematics, but I must confess that I didn’t understand a word, maybe Gödel’s ideas are so complicated that even university professors can’t explain – and understand – them.”

And Jayanta Chakrabarty from India also came across Gödel’s work during his studies:

“My first encounter with this Czech-born genius, Kurt Gödel – perhaps the greatest logician of all time – was while studying the Neumann-Bernays-Gödel set theory in my post-grad classes wherein Gödel's contribution proved to be significant. In 1931, at the relatively young age of 25, he developed ‘Gödel Numbering’ – a technique which codes formal expressions as natural numbers. The method, commonly known as incompleteness theorem, helped to solve many set theory problems that had been evading mathematicians for years. Gödel's logical and mathematical foresight thus had an immeasurable impact upon the scientific and philosophical thought of the 20th century.”

“Kurt Gödel was born in 1906 in Brno. He became a naturalized American in 1948. He was a member of the prestigious Institute of Advanced Study and later a professor of Mathematics at Princeton University. His theorem on logic in 1931 was a masterpiece. He was a contemporary of Albert Einstein.”

Not only a contemporary but a friend, as Constantin Liviu Viorel from Romania writes later on in his answer:

“The young Kurt was called by his family Herr Warum, or Mr. Why because of his curiosity... In 1929, at the age of 23, he completed his doctoral dissertation under Hans Hahn’s supervision. In 1931 he published his theorems ‘On formally undecidable propositions of Principia Mathematica and related systems’. In 1933 Gödel went to USA, where he met Albert Einstein and they became good friends. In 1987 the Kurt Gödel Society was founded, named in his honor, for the promotion of research in the areas of logic, philosophy and the history of mathematics.”

“I think February's mystery man is Kurt Gödel, who made his fame in 1931 with the publication of his Incompleteness Theorem, also known as Gödel's Theorem.”

Fares Alnsair from Jordan mentioned an interesting detail in his answer:

“Kurt Friedrich Gödel was born on April 28, 1906, in Brno (German: Brünn), Moravia .... His death certificate reported that he died of ‘malnutrition and inanition’ ...”

“He spoke very little Czech but had a life of many citizenship changes. At the age of 12 automatically becoming a Czech citizen when the empire broke up at the end of the Second World War. At the age of 23 be became an Austrian citizen, at 32 a German citizen when Nazi Germany annexed Austria and at 42 an American citizen. Later in life he had a fear of being poisoned and would get his wife to taste all his food before he would eat it himself. His wife (Adele) was hospitalised for a period of time and as she could no longer taste his food for him, he refused to eat and eventually died of starvation weighing only 30 kg on January 14th 1978.”

Steve Wara from France included a suggestion in his answer:

“What a rare genius brain this guy was! Why doesn’t your RP Team publicise his mathematical abilities and tricks much more aggressively, as a campaign tool to encourage especially young female students who seem to shy away from maths – at least that is what seems to be the case in Cameroon, the part of the globe I am originally from.”

David Eldridge focused on Gödel’s ideas in his detailed answer:

“Mathematics is largely about proving arguments to be true or false. Gödel’s two incompleteness theorems show that there would always be some propositions that could not be proven true or false using the rules of mathematics since to do that one needs to be able to go outside of the realm of the proposition. That would in its turn create a larger problem of incompleteness.”

And Charles Konecny from Ohio also elaborated on the idea of incompleteness:

“When checking up on Gödel, as one article stated, ‘you have to go to the remotest regions of mathematics’. After reading about Gödel's theorems, (completeness or incompleteness), axioms, hypothesis, functions, numbering, logic, realism, systems, and whatever else, the only thing I am sure of is that he was a very gifted and brilliant man. Anyone who can cause Albert Einstein to have doubts about his ‘Theory of Relativity’ must be acknowledged to be one of the greatest of mathematicians. So that is my ‘completeness’ answer ... or is it my ‘incompleteness’ answer?”

And finally Colin Law from New Zealand sent us a long answer containing details about Gödel’s personal life as well as work:

“Kurt Gödel’s ancestors came from Germany on his father’s side and from Jihlava on his mother’s side. He was the second son of Rudolf and Marianne (born Handschuh). He lived in Brno until the age of 18. Kurt's father owned a textile factory and the family was wealthy. Their home in Brno was in Husova Street and they later moved to a villa on Pellicova Street. Kurt's grandfather Joseph Gödel was a famous singer in his time.

Thank you very much for your well-researched and interesting answers. The rule is only four of you can be rewarded for your efforts each month. This time the lucky ones are Juan Carlos Gil Mongio from Spain, Ms Deepa Chakraborty and Umesh Kumar Yadav – both from India and Paul R Peacock from Australia. Congratulations and you can expect your parcels from Prague to arrive in the coming days. Those of you who haven’t been lucky this time can give it another try if they wish. In this month’s question we move from mathematics on to philosophy:

In March we are looking for the name of the Austrian philosopher who was born in 1859 in the Moravian town of Prostějov and died in 1938 in the German city of Freiburg. He is known as the founder of phenomenology.

Your answers need to reach us by the end of March at english@radio.cz or Radio Prague, 12099, Prague. Until next week, we’ll be looking forward to your letters. 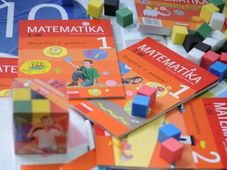 If you ask Czech kids what is their most hated subject at school, the answer is nearly always the same: mathematics. This may soon… 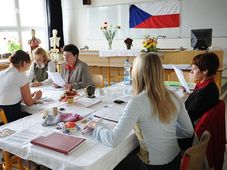 May 2nd is D-day for the close to 90 thousand students around the country sitting their school leaving exams. The standardized exams… 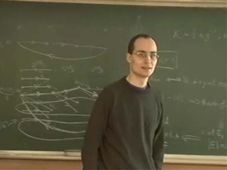 On this month’s Science Journal we have the wonders of numbers with maths king Dr. Daniel Král.