Hello from a cold and snowy Prague and thanks for tuning in to Mailbox, Radio Prague’s weekly platform for your views, questions and comments.

Barbara Ziemba from Illinois was recently one of the winners of Radio Prague’s monthly quiz:

“Happy New Year Radio Praha... I appreciated the book regarding the history of Radio Praha. I found it most interesting reading about its early days and struggles through communism and still surviving to this day. Keep the news coming.”

Terje Nielsen writes from the other side of the globe, from New Zealand:

“So happy to hear the news that you're on the air at least until 1st of February 2010. Just hoping that this will mean that it is hope that your transmissions will continue for 2010 and further.”

Thank you very much for your interest and support. At the moment we are still unable to give you an update on the future of Radio Prague’s shortwave service. For the time being we are following our regular schedule and we will, of course, inform you of any changes once we know the details.

Staying with matters concerning Czech Radio, people from all over the world often turn to the English section of Radio Prague for general information regarding Czech Radio, such as archive recordings, booking studios, the history of the radio symphony orchestra and so on. Czech Radio has recently revamped its English pages to serve precisely those who are interested in the public service institution itself, rather than its international broadcasts. You can visit the English pages at www.rozhlas.cz/english. There you will also find the contact details. 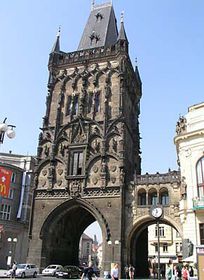 Prašná brána Now let’s look at some questions sent in by Thomas Kuca from New York:

“Please tell me when Prague’s walls were torn down. Did a wall encircle both the Old and Lesser Towns? How did the existing Hunger Wall get its name?”

Walls surrounding the Old Town were raised during the reign of the last Přemyslids in the 13th century. The wall had eleven gates – Prašná brána or the Powder Tower in the centre of Prague being one of them. Three Gothic fortification towers have survived to this day just off Prague’s Národní Street enclosed by more recent buildings. Several streets in Prague still bear names suggestive of a former fortification system: for example Hradební – Rampart Street or Na Příkopě referring to a ditch along the Old Town walls which was filled up as late as the 18th century. Walls around the Lesser Town were raised at about the same time as the Old town walls, in the 13th century.

The Old Town walls were torn down in the latter half of the 14th century because the newly built New Town had its own defence walls. Stretches of those have been preserved to this day as well as parts of the Lesser Town walls on Petřín Hill.

The Hunger Wall was built between 1360 – 1362 on the orders of Charles IV on Petřín Hill to protect Prague Castle from the West and South. The time of the construction coincided with a famine that hit Prague at that time. Popular legend has it that Charles IV ordered the works to feed the city’s poor but historians have refuted the myth.

Now moving some two centuries forward in history, here is our quiz question for this month:

Our January mystery person is the English Renaissance poetess who came to Prague with her alchemist stepfather. She is said to have been fluent in Czech, English, German, Italian, and Latin – which is also the language in which she wrote her poetry. She died in childbirth at the age of just 31 in Prague where she is buried.

If you know who this mystery person is, send us an email to english@radio.cz or a letter to Radio Prague, 12099 Prague by the end of January. Those are also the addresses for your comments, questions and reception reports. Thanks for listening today and take care.

Collapse of city walls investigated on suspicion of negligence

Work is underway to enforce a stretch of the 16th century city walls in Hradec Králové, in eastern Bohemia, a part of which unexpectedly collapsed…