Over the past week Prague was the focus for discussions between experts and businessmen from Europe, the United States, Canada, and Australia, about their experiences with the medicinal cannabis market. It’s a global market that’s growing fast and reckoned to be soon worth hundreds of billions of dollars. But the story in the Czech Republic and in many other places is of growing pains and the early expectations not being realised. 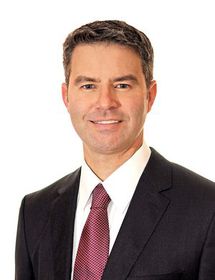 Sean Carney, photo: archive of Tilray A mixed congregation of what looked like hip businessmen and aged hippies gathered in one of Prague’s top conference locations last week for what was described as the European – American Cannabis B2B Conference. Actually, the visitors came from a lot further afield as well. The main focus was the way the global, mainly medicinal, cannabis is taking off or not.

And the Czech Republic appears to be a good case in point about a hesitant and stuttering market development. It was with a blaze of publicity that medicinal cannabis was legalised in the Czech Republic in April 2013. But legalising is one thing, developing and encouraging a functioning market that meets demand is another.

Prague-based Sean Carney follows developments on the Czech and European market for the one of the biggest Canadian producers of medicinal cannabis, Tilray, and moderated large parts of the recent conference. I asked him why the Czech medicinal cannabis market didn’t appear to be functioning well with limited suppliers and high prices.

"So, there’s a very big demand, even Jindřich Vobořil, the Czech National Drug Coordinator, based on real data estimates that there are around 800,000 Czechs using cannabis for medical purposes annually. So, there’s real demand, and there are people using, but it’s all from the black market and untested and may contain pesticides, heavy metals, pathogens, etc. But, there is no domestic cultivation of medical cannabis for a variety of reasons. One of the issues is that the Czech Republic adopted the Dutch model where they have a monopoly producer that produces for the state only, and only the varieties that the state agency wants. They have to sell to them, they produce or can turn those raw materials into an appropriate dosage form so, the Czech republic is left with a situation where it has become unattractive to cultivate here and there’s is very little ability to deliver to the pharmacies the product that the doctors and the patients want."

"There’s is very little ability to deliver to the pharmacies the product that the doctors and the patients want."

So, basically what we have here is that there is a market, but the demand is not being met. So, how might that change in the near future? What signs are there that a proper market can develop within the Czech Republic?

"So, it’s simple. There are three things that need to take place. One: there needs to be appropriate dosage forms. That’s probably the most important thing. That means not just dried cannabis, but cannabinoids and other dosage forms for example. Drops, capsules, suppositories, these all have well understood dosages and compositions, and these are what the pharmacies and patients want. So that’s just one small change, to allow the cannabis to be in other forms.

"Two: the prescribing of cannabis needs to be made like any other prescription drug. That means either no electronic prescriptions for all medicine in the Czech Republic, or allowing electronic prescriptions for cannabis. If that doesn’t become the rule for all drugs, then that should be eliminated. Three: We need to have insurance coverage for it. It is the only prescription drug in the Czech Republic, and many European countries, where patients really have to pay for it themselves, where there is really no possibility of coverage from insurers, and the people who need it most tend to be on disability, so they cannot afford it. So, there needs to be insurance coverage, but the hope is that the Czech Republic will follow what is happening in neighbouring countries like Germany where there is a new system in which the medical insurers are compelled to help pay for the medical cannabis, including the extracted and drop forms. The first patients who have purchased the extracts in the last few weeks have made applications for the insurers for reimbursements and we are expecting that by the end of the year. If the insurers decide to cover some of the cannabinoid costs, we are expecting that that precedent be adopted within the Czech Republic without delay." 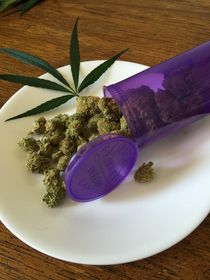 Illustrative photo: chcifyc / Pixabay, CC0 How expensive is it if you try to pay for it in the Czech Republic for the dosages at the moment?

So, what is the view of the general medical community within the Czech Republic? Is it more accepting now of the arguments that this is a valid treatment for these ailments? Is there a sort of groundswell of support for medicinal cannabis?

"I think there’s a pretty good acceptance of cannabinoids for medical purposes for specific indications, and there are quite a wide range in the Czech Republic, but the physicians want a consistent dosage form that the patients are used to, so that means capsules, drops, tinctures, and depositories. So, they don’t want this pulmonary delivery via smoking or the use of vaporization where you inhale without smoke, but that sort of device can cost between 200 and 500 euros, so again the patients on disability can’t afford it."

More generally, how do you think the market is going to evolve in the Czech Republic over the coming months? Do we expect to see any breakthroughs?

"Well there are some encouraging signs. The potential prime minister Mr. [Andrej] Babiš, from the party ANO, has already indicated that there needs to be some progress here, either being a wider availability or patients being able to cultivate at home. That’s a statement that he has made publicly. Then there is the Pirate Party, the third largest party within the parliament, and they would like to see a full legalization of cannabis from a very rational point of view, being that this increases safety, decreases crime, and can generate billions of Czech Crowns annually for the tax coffers.

"We looked at the Czech Republic, but found that Portugal was a lot more inviting."

Can we expect new entrances on the market or new suppliers?

Okay, so you don’t want to say too much about it at the moment then?

"We’ll be making a statement in the coming weeks on this topic."

Overall in the Czech market, how backwards is the development here? You had mentioned Germany and other European countries, and I mean, it’s legalized, but it still hasn’t taken off. How is it going worldwide when you compare it to places like Canada and other places where it has been legalized, how does the Czech Republic compare?

"Well, four years ago, well almost five, when the medical cannabis bill was approved in April of 2013, it was very optimistic, all of the parliamentary parties at the time supported it, and there is already an understanding and acceptance of cannabis here. However, nothing happened in the ensuing four years. The Social Democrats controlled the Ministry of Health and kind of let this medical cannabis system decay. There was really no effort made on a political level or in the drugs regulations to make cannabis available, whereas in other countries, Canada for example, the prime focus is making access available for the patients. That’s putting the patients first, not bureaucracy first. 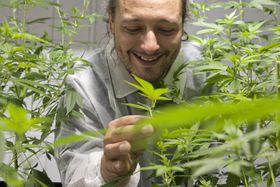 Illustrative photo: Martin Svozílek I mean if you can grow this stuff in Canada, there’s no reasons why you shouldn’t be able to grow it or make it a commercial product in the Czech Republic and there’s no reason we should be a major European player or even a world player?

"The Czech Republic could do it. They could become a major player if they wanted. There’s already a lot of know-how here which is one of the most important things. You can grow cannabis anywhere indoors, which is a little bit more expensive that outdoor in a greenhouse. But the Dutch model that was adopted here is a monopoly model and it doesn’t encourage innovation, investment, or research, and it just a race to the bottom for a mediocre quality product, Mr. Vobořil has noted that there’s over 800,000 patients here using cannabis for medical purposes annually.

"In the Czech Republic, there are 10.5 million people. In Canada, there are a little less than 40 million people. In Canada, there are around 40 active licensed producers. So, there’s about one active and licensed producer per million inhabitants. So, the Czech Republic, by that measure, and similarly in Israel, could have 10 full-scale medical cannabis producers delivering product to the market, and there is a demand for it. Regardless of whether officials choose to admit it, there is a demand, but they’re pushing everyone to go to the black market, and it puts persons like myself and colleagues who have some sort of understanding of this market in a place where we are constantly getting bombarded with questions like “Where do I get extracts?”, “Who do you know who makes it?” and it makes compromising many people and putting us in legal jeopardy just because there has been in past governments a lack of willingness to expand access. And it’s worth noting that this is an economic opportunity for any countries that embrace it. Portugal, for example, recently issued licenses for our company Tilray to produce, in Portugal, high THC medical cannabis and cannabinoid products for export, and were going to invest up to 20 million euros, and this was an opportunity that could have come to the Czech Republic. We looked at the Czech Republic, but found that Portugal was a lot more inviting."

"There’s a black market for seniors only, where seniors are treating amongst themselves, and behind every chalupa [country house] there’s a few plants."

So, people who want to buy specified doses, what do they do? Do they basically go online and get it sent through the post if the Czech system doesn’t supply what they want? What do they do?

"There’s a huge black market. There’s a black market for seniors only, where seniors are treating amongst themselves, and behind every chalupa [country house] there’s a few plants. That’s fine for therapeutic use, in that case that’s sufficient, but for people with debilitating conditions, people with multiple-sclerosis, epilepsy, certain types of cancer, glaucoma, some sorts of neuropathic pain, these people need medicine. They don’t need some flower that they have to process. They need specific dosage forms, and right now they’re going without, or they’re putting their loved ones or caregivers in legal jeopardy."