A Czech inventor is behind what is claimed to be a revolutionary lithium battery which could be the answer to the world’s energy storage problems. And the dream of inventor Jan Procházka is now taking shape with a high tech factory being constructed for the production of those small, high powered but low cost batteries in the far east of the Czech Republic. 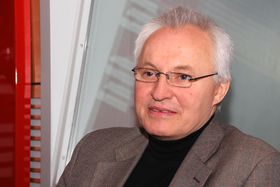 Jan Procházka, photo: Šárka Ševčíková Procházka and the Czech investors backing his project are also looking at the follow up steps needed to conquer world markets. An office in the United States should be opened next month and US investors will be invited to get on board as well. The roll out of the Czech technology is also envisaged in Asia and around the rest of the world.

But the path from innovation to 1.0 billion crown Magna Energy Storage factory has not been easy for Procházka and his backers. It has included some false trails, such as a would be Chinese investor; taken more time than expected, and included a review of the expansion model for going global.

But Jan Procházka first of all started with the latest developments and the mid-October launch of construction of the battery factory near the town of Havířov.

"We are planning to build a production hall with the capacity of 1.2 GWh a year. We want to make our 3D batteries as we call it. This should be built in the next two years. We expect production by the end of 2019. We need roughly 18 months and about six months to run it and optimise the production line. So, in around two years we would be able to employ around 250 very qualified people and they would have to run robots and fully automatic production. Through contracts around 1,000 extra people could be employed. "

Most of the production will be by robots with the humans running the robots, that’s basically it?

"Everything has to be run in a fully automatic mode."

Maybe you can give some context to 1.2 GWh? How much is that in terms of the number of electric cars that could power? A lot of people will not understand what 1.2 GWh is.

"Sure, sure. 1.2 GWh would be 1.2 million 1 KWh batteries. Roughly when you look in cars they have big batteries, some of them have 1 KWh batteries. So that would 1.2 million of those, in a lithium version of course. We want to split the production into two different modes and we want to make 1 KWh modules which would be good for, say, small energy storage such as home energy storage units and similar units. The second part of the battery production would be dedicated to large batteries. So, depending on market development, we are looking at 5 and 50 KWh per cell. You can imagine that today the cells are typically 10 W hours so we will be making something that is 5,000 times bigger…"

And that would be used for what sort of applications? 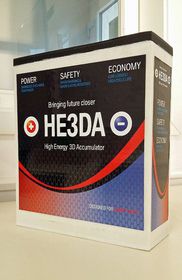 Photo: archive of HE3DA "That would be used for large back up batteries used for balancing of solar farms, also for banks and hospitals, they use large amounts of lead acid batteries. They are directly replaceable by this system as large batteries in a standby mode or eventually as energy storage. In our field, energy storage starts at 100 MWh units. So we think we are still a couple of hours away from that."

Technically you could go there, it would not be a big problem?

"No, no no. Our technology is exceptional in the way that we can build huge cells, big blocks. We can just produce big modules and the difference is cooling. We can cool the battery from inside instead of cooling them from the outside. That really gives us a huge advantage on the market and it means that energy storage can be a lot more compact."

I looked at your web pages and on those web pages they talk about the start of the factory and production happening almost now. So you are a few years behind schedule. What’s the reason for that? Has it been a lot more problematic to get the investment together or the permits [for construction].

"Well, our delay is about six months so I don’t think it should be a big concern. But yes, it is the investors who really decide how fast we will produce and how big the factory will be. Right now we have a portion of financing to go for 1.2 GWh and we are hoping that we won’t rely on new investors afterwards. We hope that we can do an extension without any external money after this."

"Next month we are opening our branch in the United States."

So you will earn enough money to expand from your own revenues and resources, that’s the idea?

I was actually at the launch at Letňany [the Prague site where pilot battery production was started on a small scale] around a year or so ago. I think then it was talked about for worldwide expansion that you would use some sort of franchising, Various parts of the world could be covered by investors and plants in places such as South America, the United States, and Asia. Is that still the idea?

"It has been slightly modified. We realise that we simply cannot license and that we have to participate. The plans are still there but our involvement is a little bit bigger than we expected. Next month we are opening our branch in the United States. We will be using a similar model or duplicate of what we apply here in the Czech Republic and we will be looking to do the same thing in the state of Nevada." HE3DA recyclable battery, photo: archive of HE3DA You will have the same Czech investors or you will seek some new ones there?

"There will definitely be an opportunity for people from all around the world and we expect that local American investors will want to participate there."

"It did indeed look like we had a strategic investor for about two months. Then when we went through the due diligence it became more and more obvious that the interest was not so serious so this deal did not happen. After about less than three months it was absolutely clear that these people would not use the option to invest into the production of our batteries. I don’t want to be specific on these details. This was a dead end street. "

The area of batteries is evolving pretty fast. You are using lithium batteries, are there worries that the technology will evolve quicker with some other type of batteries or applications, such as cobalt, might come on line or that lithium might become too expensive on the world market even for your application?

"I don’t see anything around that could replace lithium."

"Well, turmoil on the market is common. I don’t know what will happen. But big companies and the useful properties of lithium batteries have already decided that this is the path for at least the next 25 years. Even though this tide will lift up a lot of boats, I don’t see anything around that could replace lithium. The lithium battery is clearly a critical element in energy storage and electric vehicle developments and I don’t see any changes let’s say in the next 25 to 30 years."