Prague has just hosted a hackathon with global participation with the target to brainstorm and come up with solutions for cities like the Czech capital where getting from A to B can be a stressful and time consuming process. Tomáš Studeník, photo: archive of Tomáš Studeník Hackathons have apparently been around for a while. But as not one of the most plugged in people, I will allow Tomáš Studeník, the organiser of this event in Prague to explain what they are about.

ʺA hackathon is an event which lasts 24 or 48 hours non-stop, that’s what we have here. It’s an event where IT specialists, coders, developers, designers come from around the world, they came here, to spend the next 48 hours developing a functional prototype of a service or product or a new design that can improve transport in cities. So get rid of pollution and emissions in cities and stress in transport in general. It is a radical innovation method that has been around for some time, it originated in the United States. It rests on two or three premises: one, if you put together in a small space for a long time lots of people, there will be ideas. If those people come from different countries, different backgrounds it’s all for the better. Again, you have a better chance of producing ideas that will work in the end."

The recent hackathon taking place over the last weekend set itself apart for its scale and the clear ambition to come up with answers which could be converted into ideas that could be used by cities with transport challenges, such as Prague, or by the companies which are heavily involved in the development of so called Smart Cities applications. Tomáš Studeník again:

If you put together in a small space for a long time lots of people, there will be ideas.

And while there was a very strong home participation in the hackathon, the event and the generous prize money on offer also drew in an ample haul of international team and contestants.

ʺWell, they came for the 5,000 euro prize, main prize. No, I’m joking. They came here because they want to see their ideas in practice and make cities better in the end. And they came from 13 countries, from Europe and Asia. And it was not just from Central Europe but also from Italy and Spain, Germany, and Russia, so it’s really a varied bunch of people that actually prefer working non-stop for two days to a relaxed weekend skiing or sun bathing somewhere. So I am amazed. ʺ

But the 48 hour event was carefully planned with the aim of channelling the contestants to focus on real problems and use real data and technology already at their fingertips. The broad overall theme is encompassed by Smart Cities, where digital and interactive applications help transport users to better choose their options such as routes and times of travel, and also have users feeding real time into data networks so that advice and planning respond to a traffic situation which is changing every second. 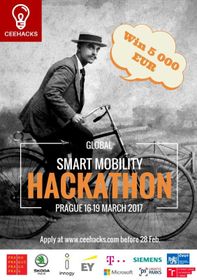 Just to give a bit of extra context, the Czech capital like the rest of the country has witnessed an explosion of personal car use over the last 25 years. Over the last year or two the number of individual car journeys in the centre of Prague has actually started to flatline and go down for the simple reason that it is so congested and difficult to park that it makes no sense to bring a car into the centre any more. At the same time though car use on the outskirts of Prague is still rising.

Public transport, and Prague has a well respected and integrated mass transport system, has also been responding to the surge in urban transport demand. Mass transit numbers in Prague are up 17 percent over the last 10 years or so. There are now 1.3 billion journeys taken on Prague’s trams, metro lines, buses, and boats ferrying passengers across the Vltava river.

But transport users are also changing. In many cases they want convenience of paying for tickets and easier connections and extra services and are will to pay extra for that if it is demanded. Anyway, in a nutshell one of the main sponsors of the event, Prague City Council among others saw a real possibility that the hackathon would come up with some inspirational answers. Tomáš Studeník gave a low down on some of the backers:

Public transport, that’s about the most stressful problem that cities face these days.

ʺWell, first of all it is the City of Prague, so it is they mayor and the town hall because they really need to solve the issues. They provided us with lots of data, with the space, with mentors. Then, of course, it’s large industrial companies, manufacturers, for example Škoda [Auto] is one of our sponsors, mobile operators. Then we have software companies, it’s large industry leaders that feel that is their area for the future and business interest for them. If they come up with solutions that deal with public transport that’s about the most stressful problem that cities face these days. More and more people now move into cities. Now about 60 percent of the world population lives in cities and it’s going to grow. And the cities were not built for that and the planners and the designers are behind on what is happening in the real world and transport is where it clashes heads on. It is really something that all the companies, even car manufacturers, feel that you cannot rely on cars. You need to make cars sensible for the future, connecting them to the infrastructure of the city.ʺ Photo: Jiří Suchomel And over to one of the contestants, Karolína Zoufalová, part of a three person team from the Czech Republic’s second city who were looking forward to coming up with ideas that would help tourists use Prague’s public transport system.

ʺI’m Karolina. I come from Brno and am from a totally different field because I am a biochemist. My boyfriend is very interested in the topic of Smart Cities and it seemed like a good idea to take part in this competition, maybe to learn some new skills and try some totally different stuff to what I normally do. To me it’s interesting maybe because we are not IT and this type of people and maybe we can have a different point of view and have some totally different ideas. We are not going to do some application, we want to be more focused on management and some processes. For us, it’s about getting some new skills and trying this out. We are motivated to win but it’s not like for us…we want to enjoy it here. "

To help guide the contestants there were a series of mentors on hand, many from the sponsoring companies, who could help them along and make sure they kept on track and took advantage of the data and technology being offered. Lawrie Gaffney was one of those mentors and comes from a company offering applications for cars updating them about traffic flows and options.

"We are here to help the attendees surface their best ideas and support them in using the various data sets, data sources, and technology platforms to bring forward really exciting and innovative solutions that can really make a difference to Smart Transportation and Smart City initiatives for the City of Prague. I am the head of customer success for Mojio. Mojio is a T-Mobile partner enabling intelligent cars or connected car services.ʺ

For us, it’s about getting some new skills and trying this out.

And the outcome of the 48-hour marathon? Well, the winner was the Red team from Prague’s Czech Technical University. They came up with an idea that should help share out passengers on Prague’s metro trains. Basically, technology measures how many passengers are in each carriage and directs passengers to the ones which have more capacity. The data can be updated in real time along the metro route, saving time and, hopefully, offering a more comfortable trip to all. Prague’s transport bosses have promised to look at the idea and if they like it they will run with it in the future. Other ideas that might get traction are train and metro windows that allow passengers to doodle and send messages and an application that better establishes the availability of bikes for hire near public transit stops. 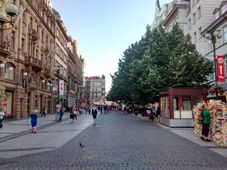 Prague finished 19th among 102 cities around the world in the first edition of a Smart City Index, put together by Switzerland’s IMD…