Prague stands out for cluster of European brain business jobs

A study has perhaps surprisingly put the Czech capital Prague and its Slovak counterpart, Bratislava, out there as some of the top locations for the concentrations of so-called brain business in Europe. Nima Sanandaji, photo: Public Domain The study, the Geography of Europe’s Brain Business Jobs, was undertaken by Nordic Capital for the European Centre for Policy Reform and Entrepreneurship. It puts Prague third in a European ranking, behind Bratislava and Stockholm, for the concentration of such jobs.

One of the authors of the study was Dr. Nima Sanandaji. I spoke to him about the results of the study, which suggests some Central European locations are catching up with West and Northern Europe as regards clusters of these types of jobs. And the first question was what exactly are these brain business jobs:

Regarding the position of Prague, are you surprised personally about the high ratings that both Prague and Bratislava have achieved in the concentration of these types of jobs across Europe?

"I would say that, even to me, it is somewhat surprising that these regions, Bratislava, Prague, and even Budapest and Bucharest, are growing in many knowledge intensive jobs. It has become the case in many of these Central European countries that much of the youth is getting educated with degrees and companies are relocating because not only can they find good workers, but they can also find these good workers at somewhat lower wages than you would find in, say, Stockholm, Sweden. That’s an important motive. I often meet with these big companies in Sweden, Germany, Malta, or the UK, and they often talk about either setting up business in Prague, or alternatively having contracts with companies in Prague where they buy services from them. So, I’m not very surprised, but I think that many people are surprised mainly because they underestimate the regions around Prague or Bratislava and they don’t understand that these regions are very important and great business centres in Europe today."

Your study, we could say, defined two areas being the brain business countries such as Sweden, Britain, the Netherlands, Denmark, etc. Then you defined this newer group of countries or capitals which you described as the rookies. So, in a way, the rookies such as Prague are profiting both from the skill sets that they have, the population, the people that they are attracting, and, as you said, the cost factor, that all of these jobs can be done at less of a cost than in Stockholm, Copenhagen, Amsterdam, or wherever? Illustrative photo: claudioscott / Pixabay, CC0 "Yes, absolutely. There is another thing as well. I believe that Western Europe and Northern Europe have a big lead in the sense that they have been ahead of Eastern and Central Europe due of course to the many years under a socialist kind of planned economy, but, not only are Central and Eastern Europe catching up, but gradually, countries like Sweden are losing their edge. So, one thing with Sweden for example, is that the education system as measure by the international FISA standard is declining. Sweden no longer has a good education system, the results are pretty mediocre and even low performing, and gradually, this has been going on for so long that recent college graduates from Sweden have a much lower knowledge level than they used to have five or ten years ago.

"Another reason why I think Central and Eastern Europe are leap frogging is the gradual stagnation of regions such as Stockholm because they have their edge, but they’re losing it. I would say that one thing is important to realize. When looking at capital regions, like, Bratislava is number one in Europe and Prague is number three, ahead of Paris, London, Brussels, and Berlin, but when you look at countries, you still find the Northern European and Western European countries at the top because not only in the capital regions of these countries are there brain business jobs, but throughout the country you can find them. Whereas in Central and Eastern European countries, you have a very strong capital region, but you don’t have strong regions elsewhere in the country, and the only western European country that follows this pattern is France, where Paris has more brain business jobs than in London, but as a whole is much poorer than the UK. It‘s an issue of centralization versus generalization of the country as a whole."

Part of what I read has to do with programming, the idea that a lot of programming jobs have come to Bratislava and Prague, but maybe, in a sense, they had been outsourced from western location, so they’re second tier programming jobs in these capital cities. Is this the case? That these may be brain jobs, but brain jobs of a second category?

Not only are Central and Eastern Europe catching up, but gradually, countries like Sweden are losing their edge.

"I would say yes and no. A couple of years ago I happened upon a book in Sweden titled “The New Geography of a Successful Enterprise”, and generally speaking, what happened in the nineties and early two thousands, was that many of the big companies in the world from the U.S., Sweden, and Germany, started to go to areas like Prague or Bratislava or even China and India, and they utilized the fact that there were many talented people in these countries that would work for them, and at that time definitely the programming jobs that were in Central Europe were second or third tier. But, gradually what has been happening over the years from the generational change is that many top companies have been started out in this country. The people have gained knowledge and are very hard working. I think increasingly we are also seeing that companies from Central Europe are beating Northern and Western European companies in competition. One interesting things that I think we’ll be talking about in the years to come is that how, let’s say programming, will actually be out performing some of the companies in Northern Europe, because these companies grow even though their setting aren’t optimum. For example, the availability of capital for these other business may be more limited in Prague, but it means that the companies that manage the growth even in that setting, will be very efficient because they grow even though the capital and the knowledge is more limited. So, they become more efficient companies that use the many talented people with somewhat lower wages than Northern and Western Europe, so I think that these regions are catching up and becoming important brain business centers in the top tiers of the jobs."

All of this is a dynamic environment. One year you may be number one and the next you’re down to number seven or ten. I mean, things can change pretty rapidly. For these sort of brain business jobs, you need to keep attracting and investing in the people that you have or attracting other people in. How quickly can it change?

"I think this is not the case. I think that this data is actually fairly sluggish. This is firm level data and the number of people that work for these firms. If you look at general sectors in economy, it really takes an economic crisis to change this data massively. In my study, I’m not actually looking at information from new firms and new jobs, but all of the existing jobs within these specialized firms. One thing that I have been talking about in this study with managers of these big companies, many of them have told me that they are looking at Prague and Bratislava and Budapest to relocate part of their work force. I live in Malta now, having moved from Sweden, and Malta has a lot of online gaming centers, so they need a lot of programmers, and many of these companies seem to be looking at these Central European knowledge regions, so more than likely, I think that we will see an increase in the Central European region which would mean that the central European countries as a whole might catch of to the Northern and Western European countries, not only as is the case now, for the capital regions. 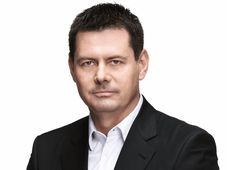 Tycoon Karel Komárek is expanding into the IT business in a big way, iHned.cz reported. His group KKCG is setting up a new holding…