Wages are now a growing issue across the Czech Republic. The central bank sees wage rises as a tool in the next year or so which can push up inflation to desirable levels. Trade unions say their membership curbed their demands during the recent recession but it’s now time for companies to offer more from what are quite often double digit profit increases. A sympathetic government is often caught in the middle. Vít Samek is the deputy chairman of the country’s biggest confederation of trade unions, the Bohemian and Moravian Confederation of Trade Unions, and says it’s high time that companies offer more generous wage increases and erode the high wage differences between the Czech Republic and neighbouring countries such as Germany and Austria. 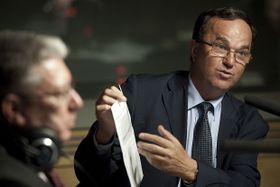 Vít Samek, photo: Filip Jandourek “Year on year we observe a splitting of company profits and there is a clear tendency to give more money to shareholders and not to employees. So it is crucial now for us to present this problem to the people in our country and send a clear message to employers in our country and their owners that it is necessary to introduce in practice equal treatment because if we go to any seminar or conference in Western European countries equal treatment is a crucial point. Everybody is saying ‘Yes, it is necessary to introduce in practice equal treatment,’ but it is not equal treatment if in some group, in the same group such as Volkswagen and some others, there are differences. And the differences are very big, between employees working in the same position in Volkswagen in Germany and Škoda here or in Slovakia, or other countries. So that is the problem for us and we seek ways how to convince management of such companies that it is illegal. It is contrary to conventions of the International Labour Organisation (ILO) and to directives of the EU. It is our problem how to convince managers and owners of such companies that it is necessary to change their practice.”

You gave the example of Volkswagen and Škoda, there is a difference of three to four fold in wages there. Is it realistic to suggest that Czech wages climb three or four times to the level of German wages?

“I do not know exactly if it is realistic, but it is necessary because there are too many costs in Europe where the prices are practically the same, energy for instance. That is a basic for households to pay bills, for instance, for energy, for electricity and gas. The minimum wage, for example, is now 300 or so euros a month, it is very low. In Germany, it is five times higher. For us it is practically nonsense to believe that this is a wage. It is not a wage, it is perhaps a contribution. So there are now too many people going from Central and Eastern Europe to seek jobs in Germany and some other countries. When we are in conferences in Western Europe, people are saying ‘It is not possible that too many people want to work here.’ We say, ‘Yes, it is practically like the migration problem now. You need to help us to have equal treatment and comparable conditions in our countries and there will be no such unreasonable movement from Central and Eastern Europe to West European countries. First of all to Germany, and then Great Britain, France, etc.’” 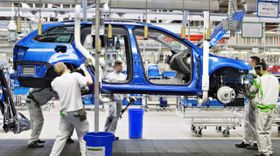 Photo: Škoda Auto We talked about Škoda [Auto], they are producing goods that are high value. There is a lot of investment in the machinery etc. but maybe part of the problem in the Czech Republic is that many jobs do not demand high investment from the companies or high skills from the workers. Then the wages are basically low because the value added is not very high. Isn’t that the problem and is that in any way changing with some of the new jobs and new investment coming or is it still low skill, low investments and low wages?

“It is around 50:50. There are some companies such as Amazon and others coming in that offer nothing for high skilled employees. But there is a potential in our country to have development centres. There are some in some factories. There are research facilities at Škoda [Auto] and there is a university at Škoda company as well. So there is potential.

“We need technical skills, technical knowledge but we there is a very low interest of young people to study such subjects or for such qualifications. We now have good relations to our employers’ confederations and there is almost practically the same move to discuss on both sides to the social dialogue to encourage people to take this direction. We need to have specific education centres called dual education centres which will offer both technical and normal education in one place and which are closely connected with companies. So we hope that there is a chance to change things but it is not easy and it will take many steps. One step is being taken in September when we are trying to organize a special meeting for which the topic will be wages but not just wages on their own but with a broader context.

And this meeting, can you say a bit more about it? Is it a meeting with the government or is it a protest meeting….?

Our idea is that every year there will be a higher minimum wage, not just 3.0 or 5.0 percent as it was for the last years. But higher.

“There is now a clear intention of the current government to increase the level of the minimum wage every year and to set up, that is part of the result of our tripartite discussion, a discussion of a specific programme, not just for next year but also for the minimum wage in 2016, 2017 and 2018. The recommendation is to have a clear rule in our legislation so that our managers have knowledge that this year what it will be year and in a few years etc. The idea is to reach a level that it should reach 40 percent of the average wage or median wage, that is a discussion whether it is average wage or median wage. We try to have this as a first step because many wage systems in companies are very closely connected with the minimum wage. Our idea is that every year there will be a higher minimum wage, not just 3.0 or 5.0 percent as it was for the last years. But higher. For instance, for the this year the government assesses 700 crowns for an increase next year but we say it should be 1,000 crowns. If we have this goal of 40 percent then it is necessary that for every year of the remaining three year mandate of this government to have an increase of more than 1,000 crowns. If there is success in such a topic then it is quite a clear signal that there are good economic reasons for higher wages exceeding three or five percent, which was the usual rate in past years.” 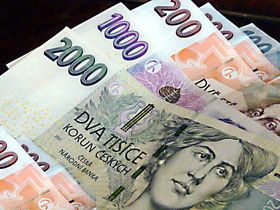 Photo: Miroslav Zimmer And are not low wages in the Czech Republic at least partly a reflection of the weakness of the unions as well over the last two decades. Your membership has gone down, you are not so strong, is this not a reflection of yourselves?

“Yes, that’s true but it is very difficult to change that. After the Velvet Revolution people are a bit frightened and day to day they get a lot more frightened than was the case years ago. In the era of Communism the only thing that was very positive for people was that they had no fear of losing their job. Everybody had his or her job. After the Velvet Revolution, there was very quickly a new situation and losing your job was a new phenomenon for people.

“There is a very weak will of youngsters and young people in our country to become trade union members. We often get requests for help from people who are not members of trades unions. They say that they cannot set up a trade union in their company because when there was an attempt to do so the people were practically dismissed in the same moment they said they wanted to set up a union, So there are many people in our society who would like to have the help of trade unions but don’t want to become trade unionists. And that is a problem of our society. So maybe the future is without trade unions.

So maybe the future is without trade unions.

“We try to make new campaigns addressed to people. There are branches, like machinery, where the trade unions are strong. In the metal industry it is also clear. It is interesting as well that the situation is also very good as well. But there in small and medium-sized companies the trades unions are very weak. How to convince them that this is useful to them? We have quite clear figures comparing where there is a company without trade unions and where there is one with them and there is on average a 15 percent difference in wages. That is an advantage but for many people it is not an argument.”