David Dorůžka is one of the Czech Republic’s best jazz musicians. The guitarist studied at the Berklee College of Music in Boston and later spent time in New York and Paris. A few months ago he released his latest album, Autumn Tales. Our tour of “David Dorůžka’s Prague” begins at the Branické skály, a rocky outcrop overlooking the Vltava close to where the 37-year-old was raised in a musical household: his grandfather was the jazz expert and writer Lubomír Dorůžka, while his father Petr is a well-known music journalist. 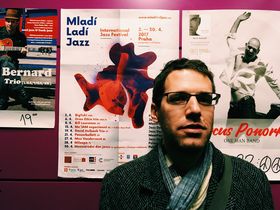 David Dorůžka, photo: Ian Willoughby “The Branické skály, the Braník rocks, are part of some very old rocks that have been here since pre-historic times. I don’t know much about it but I somehow have that feeling every time that I come here.

“It’s a beautiful wood. It’s a nice place for a walk and also there’s a great view of the whole of city of Prague from here.

“I also have a lot of memories of this place from my childhood, so it’s really a special place to me.”

“Yes, I think not that many people know about it. You don’t see so many people here, usually.

“So yes, it’s really a special and hidden place. And at the same time you can see the whole of Prague from here – and it’s not that far from the centre.

“That’s another thing I like – that it’s kind of secret and it’s never crowded here.”

One unfortunate thing is that, I guess because it’s a very steep fall to the valley below, there’s a kind of wire mesh fence in front of this pathway here.

“Yes, that’s true. Actually, I don’t how it is now but I think there used to be a hole and a gate in the fence, a little bit further south, where you could actually walk down the hill, where it was not that steep.

“But the main wall of the rocks is very steep, so it’s for a good reason that there’s this fence.” 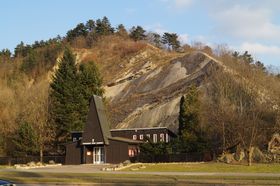 Branické skály, photo: Miloš Turek What kind of an area is it here? The place where you lived, just around the corner here, is called Zelený pruh, which means, I guess, Green Zone or something.

“Green lane I think would be a good translation. Yes, that’s where I grew up and where my parents still live these days, with my sister and her family: her husband and her kids.

“And it’s where my grandmother and grandfather also used to live. That’s the house where I spent my childhood.”

That sounds like very much a minority experience, to live in Prague but in a big family home with several generations. In fact, I can’t think of anybody I know who has had that experience here.

“I think in this part of town it’s actually quite common, because you mostly see these family houses.

“I think it’s typical in some parts, not typical in others. So I guess I was very fortunate to have this experience.”

From Branické skály, Dorůžka and I walk down a series of steps to Braník, the district by the Vltava the guitarist calls home today. There he leads me to the lively and welcoming Periferie Café, as impressive a spot as you are likely to find on the “periphery” of Prague. 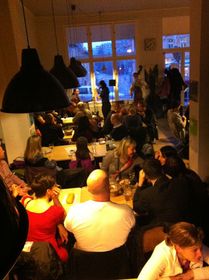 Periferie Café, photo: archive of Periferie Café “I have known it for about four years, since I moved to the apartment where I live with my family these days in Starý Braník, Old Braník.

“It’s just a very beautiful café and again it’s a place that’s kind of hidden; not that many people know about it and it’s somehow special to me.

“The service is very nice always. They have some great food – really fresh and really tasty – and they change the menu very often.

“Usually they play nice music too – and that’s another thing that I like about it.”

Do cafés like this, especially in more out of the way parts of Prague, serve in a sense as a kind of culture centre? Where it’s a place to go and feel part of the community?

“I have to say it does. I think this kind of place is quite special, if we remember that we are sort of on the outskirts of Prague.

“I don’t think there are that many cafés on this level on the outskirts. I’m sure there are in the centre. That’s what’s actually special to me about this place.”

For you, generally speaking, what makes a good café?

“The coffee. The drinks in general. The food, if they serve food, which this places this: very good food at very reasonable prices.

“Also the service, of course, and the environment – the whole vibe of the place. It’s not easy to put in words.”

For me what’s also important is big windows onto the street. Maybe there isn’t much to see here in Braník, but at least you feel like you’re connected to the street.

“I totally agree. Windows are important and there are huge windows here. 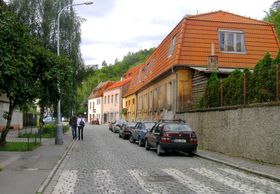 Braník, photo: Packa, CC BY-SA 2.5 “Actually it’s night at this time, but there are some remarkable things to see in Braník, even though one wouldn’t notice them right away.

“It’s totally run down now and I think somebody is trying to build a brewery there, or it has some sort of other function now.”

So Braník does have some sights?

“I think so. And you know it’s just a very pleasant part of the city to live in, for me, with these small houses.

“You sort of feel like you are in a small town or a big village, but you’re in Prague and it’s very quiet and not hectic at all. That’s what I like.”

Leaving Braník, David Dorůžka and I take a tram along the river before crossing at the Jírásek Bridge and making our way to Jazz Dock, a cool music venue on the lock under the embankment Janáčkovo nábřeží. It’s too loud to record inside on a busy Friday night so we stand in the doorway as punters pass.

“I think for anybody who wants to hear great jazz, it’s really the place to go to. It’s a very nice club with great music, a great programme, good food, good drinks, good environment.

“I really like it as a place to play and to listen to music. Very often bands from abroad that I want to hear come here. So I come here frequently, as a performer and as a listener.”

What makes it better as a venue? Is it the fact that it’s purpose built as a music venue? 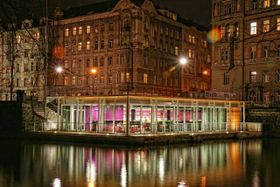 Jazz Dock, photo: archive of Jazz Dock “It’s hard to say. I don’t know so much about that. But I think it’s just the vibe and also the people who run it.

“The owner is a real jazz fan and a guy who wants to have this place as a venue for music, not just a place to drink while music is playing.

And it’s a really spectacular place here, by the river.

“Totally, it is. It’s special. I don’t know if I can think of any other club in a place like this, just right on the river.”

Apart from Jazz Dock, what are the other good jazz venues in Prague?

“Another place I like is U malého Glena, which has been in existence for over 20 years – 23 years or something like that.

“That’s a place I like too and where I’ve played a lot. It has a very nice atmosphere and good bands play there.

“Other than that it’s pretty difficult. There are a bunch of other jazz venues in Prague and when tourists or foreigners come to Prague they are very often very surprised at the number – you see ‘jazz club this’ and ‘jazz club that’ all over Prague.

“But really I think the reality is that many of those places are places where there is some sort of jazz music playing, but it’s not really important what kind of music and whether it’s good or bad.

“The most important thing is to get a lot of tourists in. The goal is that they drink as much beer as possible and the quality of the music is not important.

“That’s definitely not true of Jazz Dock and that’s why I like this place.”

I have the perception that jazz was the most popular music among Czech intellectuals before, say, the mid-1960s and from that time it has been less popular. What state is the jazz scene in today in Prague? 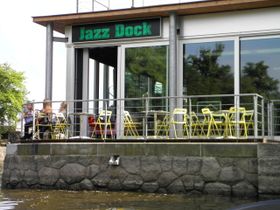 Jazz Dock, photo: Eva Dvořáková “I think today it’s in a very good state, actually. The Czech jazz scene has really improved and gotten much bigger in the past 15 years.

“Myself, I started performing in public when I was 14, in 1994, and there were some really good Czech jazz players at that time who I had the chance to work with.

“At that time also there were also a number of American musicians who were actually living in Prague in the mid-1990s.

“But the Czech scene at that time… the number of good musicians was not very big.

“And it’s gotten much bigger since then. Today I’m pretty happy that I live in Prague and I get to work with some really great players who also live here.

“So I can’t complain. I think it’s improving and it’s very interesting.”

To what do you credit the fact that today there are more good jazz players, that the scene is livelier than it was a few years ago?

“You can see this not just in the Czech Republic but everywhere. There are schools that people go to and the ways of studying the music these days are easier than they used to be.

“There are just more musicians than there were before. So all these reasons, I think, contribute to that.

“And hopefully it also means that more people are interested. At least more musicians, but perhaps more members of the general public, as well. So that’s a good thing.”

Do you have a sense that the audience is bigger than it was, say, 15 or 20 years ago?

“So in that way I feel good about that.

“It’s not like suddenly there would be crowds and thousands of people coming to jazz clubs. That’s not happening.

“But I’m optimistic in this way. I think there are people who like this music and who appreciate it and that’s important: not the number of people, but that there are some people who are into it.” 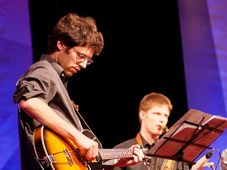 In today’s edition of Sunday Music Show we will be playing a new album by David Dorůžka, one of the country’s most distinguished jazz… 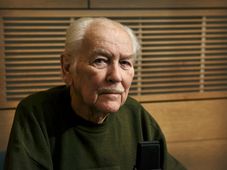 Lubomír Dorůžka, who sadly died on Monday at the age of 89, was one of the all-time great Czech music writers. He started out during… 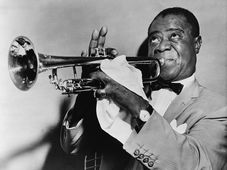