A member of the country’s large Vietnamese community, Mimi Lan Nguyen came to the Czech Republic in the early 1990s while still in her early teens. Today she is a successful fashion designer with a flagship boutique on the capital’s Štěpánská St. The shop is actually on the outside of the grand city centre Lucerna Palace, and it was there that Mimi began introducing me to “her Prague”. Mimi Lan Nguyen at Lucerna Palace, photo: Ian Willoughby “I chose Lucerna because my life is between Lucerna, Štěpánská and Dejvice. I live in Dejvice and I work in Štěpánská and every day, a few times, I pass through the Lucerna Passage.

“I really feel happy each time I pass through. Because of everything here. Because of the lights, the architecture. I love the passages in Prague, because I think Prague is one of the few cities that have very beautiful passages.”

And this is maybe the most beautiful...

“Yes, I think this is the best passage in Prague. I love also... you can see here the coffee bar with a huge window. And if you are a fan of Art Nouveau and Art Deco, this is really beautiful.

“There is also a concert hall that I really recommend. They have dance parties there and it’s really nice.”

Did you go there for your school graduation or something like that?

“Yes, wow, 10 years ago. I remember it till today because all the girls looked like brides, with huge dresses!

“Also here you can go to concerts at the Lucerna Music Bar. For example, Primal Scream just played there. And every weekend they have a disco…”

“Yes! I love it, it’s great. We go sometimes and it’s really nice.

“Also in the passage you have an original French bakery. It’s called Saint Tropez and the woman who runs it is from there and she imports butter and sugar from France – if you want a real French croissant, you buy it here at Lucerna Passage.” 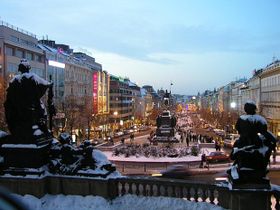 “Yes, I don’t like Wenceslas Square. My first impression of it in the beginning when I came here in 1993… the first place my mum took me was to the centre, to Wenceslas Square. I looked at and said, wow, it’s so strange. It’s not ugly, it’s not beautiful – it’s strange…”

It’s not even a square.

“Yes, it’s not even a square. It’s a boulevard or something like that. Why do they call it a square? Everything around it, like McDonald’s, is OK, but the shops, the atmosphere – the atmosphere is so strange.”

Well for me there’s simply nothing on it. There’s no bar or restaurant on it that I would go to.

“Exactly. Every day I go to work in Štěpánská and I pass by Wenceslas Square and if I have to choose somewhere to eat there, I can’t. I can really recommend nothing to anybody there. Really a strange place.”

Though mere metres from Wenceslas Square, Františkánská zahrada feels like a world away. A small bush-filled park hidden inside a city block, it’s a spot where many Praguers come to relax, or at least take a short cut. Mimi Lan Nguyen is a frequent visitor.

“I love this place. For me it’s like an ocean in the centre of Wenceslas Square. When you come to the garden, especially in the summer, it’s beautiful, because there are a lot of roses here, and green.

“Even in the winter it’s also nice. It’s quiet. It’s like you’ve come to a completely different place.

“I have two kids and they come and visit me in Štěpánská and wait for me at work and then I take them here. There’s a beautiful newly reconstructed playground. 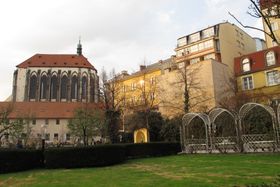 Františkánská zahrada, photo: Kristýna Maková “We usually buy ice cream in Světozor and then we come here to eat it…”

“Yeah, there’s always a big queue there, even in the winter. We always pass through the Světozor Passage, buy ice cream and eat it here in this ocean.”

One thing also about this place is that it’s relatively hidden. For example tourists wouldn’t come in here as they wouldn’t know to come in here.

There’s one kind of negative side of this park also, I would say. Even as we walked in here we passed what looked like drug addicts doing some of what they do.

“It’s true. Because here there are a lot of places that look like that [points to structure on edge of park]. I don’t know what it’s called in English…”

They’re kind of like grottoes – places to hide, basically.

“Yes, you have one, two, three, four, five places to hide. So sometimes you meet those people hiding there.”

I guess people don’t walk so much in the middle part of the park, they walk more around the edges, so people could get up to all kinds of business here in the middle.

“Yes, it’s true. Now in the winter it’s not that busy. In the summer, or in spring or autumn, all of the benches are full. You can’t get a seat here.

“But it’s a really very nice place to have a date or a business lunch – why not?” 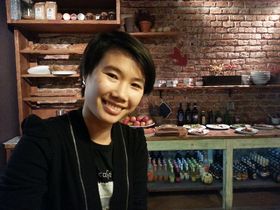 Mimi Lan Nguyen at one of her favourite eateries, photo: Ian Willoughby A business picnic?

“Yes. A business picnic in the centre of Prague – why not? It’s much nicer than sitting somewhere in a restaurant.”

Also one thing I’ve always found slightly strange is this shop over here. It’s like a little house and is called Tribu or something – and somehow it stands alone here in the middle of the park.

“The girl who owns it is called Kamila. I know her and she’s a fan of alternative design clothes. You can go in and find very special things from some designers, very limited, you can’t find them anywhere.”

“Exclusive. Like the park, you know. I think everything here belongs together… And all of the trees here are apple trees. In the autumn there are really apples – big red ones in the trees.”

I’ve got to come back next autumn.

“Yes, it’s like the garden of love. There are roses and apples…”

Just no snakes, I hope.

Taking one of Františkánská zahrada’s four exits, within moments Mimi and I are on Jungmannova St., the location of one of her favourite eateries in Prague. Small but stylish, Home Kitchen has only a couple of high tables and is as cosy a spot as you will find in the downtown area.

“It has a good atmosphere. Also I like places that are simple. The style here, the interior, is very simple.

“The most important thing is that the food here is very good. Every day they make three or four kinds of food. Whenever I come here, even if I don’t know what they’re cooking, the food is always good. Always. And the coffee is good too. 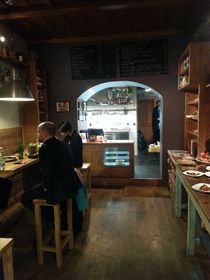 The cosy Home Kitchen has only a couple of tables, photo: Ian Willoughby “As you know, around Národní třída and Wenceslas Square there are a lot of restaurants: Czech pubs, Chinese fast food, Vietnamese fast food and Italian – not real Italian but Yugoslav Italian. So there aren’t a lot of places like this place, which is cool.”

It’s very cool. The style reminds me of what you might find in New York or some Western city, with exposed brick on the walls and very nice wood everywhere. It’s very cosy.

You come from Vietnam and one interesting trend in recent times here is how a lot of former Chinese restaurants run by Vietnamese people are now selling Vietnamese food – and they’re much better. Why do you think it’s only now that there are so many Vietnamese restaurants in this country?

“It’s very funny – I can say that half of the Chinese restaurants are run by Vietnamese people, as you say.

“I remember just five years ago saying to them, don’t make Chinese food, make Vietnamese food. Because I’ve travelled all around the world and everywhere the Vietnamese restaurants are very famous and the people love them – even in Norway and Copenhagen and places like that.

“But they said, no, the Czech people won’t eat it. And then one brave place in Vinohrady started [on Naměstí Jiřího z Poděbrad]. They were the first brave ones – they started a Vietnamese restaurant. Then everybody started talking about it and it took off.

How do the Vietnamese restaurants here compare to in Vietnam? For example I know in America the Chinese restaurants sell food that’s very different from in China. Home Kitchen on Jungmannova St., photo: Ian Willoughby “It’s a bit different. Because they use a lot of herbs in Vietnamese food, like coriander and things like that. And they don’t use as much in the restaurants here.

“Once I asked them, why don’t you put in the herbs? And they said, we put them in but they leave all the herbs in the bowl, and you know it’s very expensive. That’s the reason.”

The Czechs just aren’t interested or they don’t know…

“Yes. They say, it’s better if we put in more meat and less herbs than more herbs and less meat.”

The episode featured today was first broadcast on January 11, 2014.