Two hundred and thirty-three candidates are running for office in the Senate elections in which 27 seats will be contested in October. The elections will decide whether the opposition Social Democrats will regain their majority in the upper chamber. Only the Civic Democrats, Social Democrats and Communists have fielded candidates in all 27 constituencies. The first round of Senate elections will be held on October 17th and 18th together with regional elections. The second round will take place two weeks later. Elections to a third of the Senate are held once in two years. 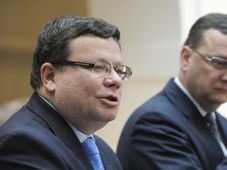 Civic Democrat Alexandr Vondra announced on Wednesday he was stepping down as defence minister. The straw that broke the camel’s back… The second round of Senate elections over the weekend dealt another blow to the centre-right coalition government. The left-wing parties…