There has been an improvement in the quality of air in parts of Moravia and Silesia after the regions’ biggest polluters were ordered to scale-down production. The regulatory measures introduced on Sunday have also placed restrictions on car traffic. The concentration of dust particles in the air still exceeds permitted levels, but is significantly lower that at the weekend when pollution in the worst affected areas was four times higher than norms permit. The authorities have now lifted the restrictions on producers but a smog alert remains in place. 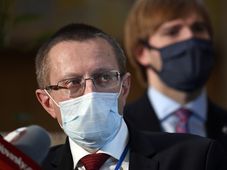