Police in Blackburn say they prevented a sham marriage between a Pakistani man and a Czech woman on Thursday. The Pakistani whose residence permit in Great Britain had expired is to be deported. The 25-year-old Czech woman was released after undergoing police questioning. Six Czech nationals were detained in Wolverhampton this week on suspicion of being part of a sham marriage ring in the UK. Babiš on Brexit: 'Hard' or 'Soft', rights of Czechs in Britain must be protected

Czech Prime Minister Andrej Babiš says he believes the EU and United Kingdom will reach an agreement on Brexit next month. But following… 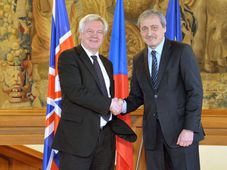