A sword dating back to the early Bronze Age has been unearthed in the region of Rychnov nad Kněžnou in north-east Bohemia, the Czech News Agency reported on Thursday. According to the archaeologist Martina Beková from the Rychnov museum, the weapon has an ornamental engraving and a very sharp blade. She estimates it was made sometime around the year 1200 B.C. 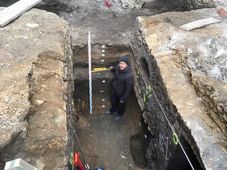