The Archbishop of Prague, Cardinal Miloslav Vlk, has taken over the symbolic Bethlehem Light from scouts in St Vitus Cathedral at Prague Castle. Cardinal Vlk said he believes that along with the flame lit at the birthplace of Jesus Christ, people bring home love and respect for one another. Until Christmas Eve people can come to light their own candles in the cathedral and also in the lobby of the Czech Radio building in Prague. The Bethlehem Light tradition was established by the Austrian radio station ORF in 1986. In the Czech Republic, this tradition started after the collapse of Communism in 1989. The Bethlehem Light is protected and distributed all over the country by scouts and Czech Radio employees.

From the Czech Republic with love: a giant Christmas tree for Malta. Drumming up voter support: opposition leader Mirek Topolanek… 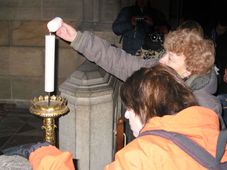 In the lobby of the Czech Radio building on Prague's Vinohradska Street there is a large yellow candle. Many people have come to light…