A court in western Bohemia has banned Jirina and Zdenek Hoffman from using registered trademarks of the Becherovka liquor company. The Hoffmans were being sued by the company for using the Becher name. According to the court, Hoffman products in the Czech Republic, Slovakia, and Russia since 1998 were counterfeit, and the court has forbid the Hoffmans from using the terms "Becher Bitter" or "Johann Becher" on their products, as well as using the initials JB on their labels. They have also been banned from using characteristically-similar green bottles. Neither of the Hoffmans has commented the ruling.

The guilty parties have been ordered to pay the Jan Becher - Karlovarska Becherovka company 5 million crowns (211,000 US dollars) in damages.

The Carlsbad based Jan Becher company, which produces the iconic Czech liquor known as ‘Becherovka’, has announced record export numbers… 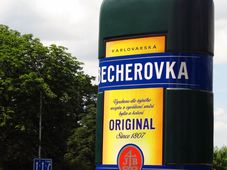