Two Czech chefs, Jan Davídek and Antonín Bradáč, have won the international competition known as the Thailand Culinary Challenge. The duo, who went by the team name of Czech Chefs and were the only European representatives to compete, beat other elite teams from countries including China, South Korea, the USA, and Malaysia. The top prize was 10 thousand US dollars. The competition took place over two days, with the chefs preparing national cuisine on the first day, and Thai cuisine on the second. 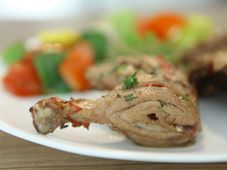