Czech historian Michal Frankl, a senior researcher at the Masaryk Institute and Archives of the Czech Academy of Sciences, has won a prestigious European Research Council (ERC) Grant of nearly two million euros with a project on refugees and Central European countries citizens in the 20th century.

Mr. Frankl, who has published widely on the history of antisemitism, refugee policies, and the Holocaust in the Bohemian lands and East-Central Europe, is the first Czech scientist in the field of humanities to win the ERC grant. Marci Shore: In Slavic languages, life happens to you

Anyone who is interested in the history of Central and Eastern Europe has likely come across the name Marci Shore. An associate Professor… 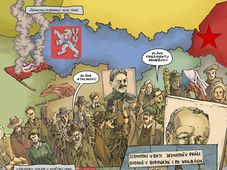 Historians rarely publish comic books, but Martin Nekola is an exception. In cooperation with illustrator Jakub Dušek he has just published…