A 36-year-old Czech tourist and her 8-year-old daughter have been found dead in their hotel room in Hurghada, Egypt, a Czech Foreign Ministry spokeswoman said on Tuesday. One of the speculated causes of death is food poisoning, although this has not been confirmed by official sources. The husband of the woman and the father of the young girl is in hospital. In an interview with Czech Television on Tuesday afternoon, the man’s sister said he called their mother saying that he has found his wife and child already dead in the hotel room and later collapsed himself. The Czech consul in Egypt is in contact with police and the travel agency, with which the victims traveled to the country. 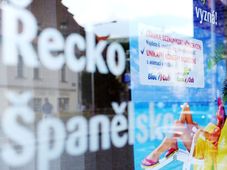 The number of advance sales for summer holiday tours has been falling since the end of last month, according to travel agencies questioned…