Czechs are marking International Veterans Day, which is celebrated internationally on November 11, the anniversary of the end of World War I. Several events are being held across the country to mark the occasion.

A traditional ceremony took place at the national memorial on Prague’s Vítkov Hill on Saturday morning. The event was attended by defence minister Matin Stropnický, who awarded medals and honours to war veterans, resistance fighters and soldiers. Part of the ceremony was introduction of the book The Other Life, containing photographs and stories of military missions and activities. 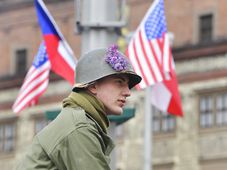 Celebrations marking the liberation of Plzeň by General Patton’s Army on May 6th 1945 took place in the West Bohemian city at the weekend.…