Sociologists and NGO representatives taking part in a panel debate on Thursday night expressed the view that more women in politics and in high managerial posts would help reduce the high level of corruption in the Czech Republic. They said that women in general have a greater sense of fair play and are more inclined to play by the rules; they are also thought to be less capable of running risks and of committing fraud. Corruption is perceived by the public as being the country’s biggest problem. 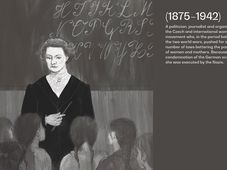 A politician, journalist and organizer of the Czech and international women's movement who, in the period between the two world wars,…