The first same-sex marriages in Central Europe took place at registry offices across the Czech Republic over the weekend as gay and lesbian couples took advantage of a long awaited law on same-sex partnerships. The new law, which took effect on July 1st, gives gay and lesbian couples some of the advantages of a traditional marriage: inheritance rights, the right to be informed about the other's health and the right to raise children, although they cannot adopt them. It has taken seven years of lobbying to get this legislation approved and the Czech Republic is the first post-communist country to legalize gay marriage.

Bill legalising gay marriage to be debated this week

The Czech Republic could become the first post-communist country to legalise same sex marriage. An amendment to the country’s Civil…

An alliance of Czech non-profits has just launched a campaign calling for same-sex couples to have the same right to marry as heterosexuals.… 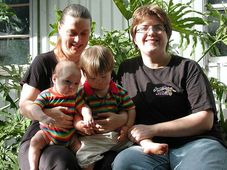 In a significant ruling on Tuesday, the Czech Republic’s Constitutional Court overturned a law which prevented individual gays and…