Cardinal and Archbishop of Prague, Dominik Duka has expressed regret in connection with claims of sexual abuse in the Diocese of České Budějovice. An investigative report conducted by journalists from the online television Seznam TV brought interviews with women claiming to have been sexually abused by church officials and presented evidence that bishops in the diocese remained inactive despite being aware of the crimes.

Cardinal Duka released a statement on the church’s website expressing regret and shock over the cases of sexual abuse, which take place here and across the world. The Cardinal went on to say that he is aware of the overly long judicial processes on the state and church level and that it is necessary to work on a substantial change.

In their report, Seznam journalists found evidence that the testimony of one victim being repeatedly raped by a priest from the Diocese of České Budějovice started being investigated in 2009, but only achieved progress last year once it was brought up to the Vatican’s Congregation for the Doctrine of the Faith. 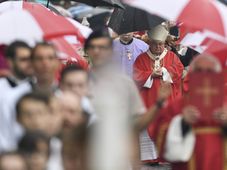