Czech javelin champion Barbora Špotáková has given birth to a son. The baby boy, Špotáková’s first child, was born in Prague on Friday morning, and has been named Janek. The 31-year-old two-time Olympic winner said she was very happy and felt a mix of euphoria and responsibility. The boy will bear the surname of his father, Lukáš Novotný. Barbora Špotáková is planning to return to athletics in October to prepare for the European Championships 2014. 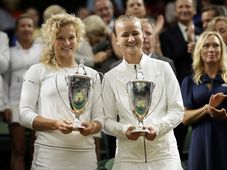