New Justice Minister Marie Benešová is considering slimming down the current justice system, according to an interview published on Thursday in the daily Lidové Noviny. She says she is considering replacing the current four-tier system of courts and state prosecution offices, with a three-tier system that would exclude the general prosecution offices in Prague and Olomouc.

Before any such decision is made, Mrs. Benešová said she will call for an expert analysis of the plan and will respect the majority opinion on the issue.

It is not the first time such a move has been proposed. In 2008, the Civic Democrat Minister of Justice Jiri Pospíšil came out with a similar proposal, but had to drop it due to a lack of funds. 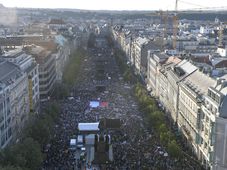 Anti-Babiš protests reach fresh heights – but what real impact can they have?

An estimated 50,000 people attended the latest, and biggest, in a series of protests against Czech Prime Minister Andrej Babiš on Prague’s…