Josef Hasil, also known as the "King of Šumava" due to his role as a people smuggler for those who were trying to cross the tightly guarded Czechoslovak-German border after the onset of communism, died in the United States on Saturday at the age of 95.

Hasil was a border guard, which enabled him to help persecuted people find a way into West Germany. In 1949 he was exposed and arrested, but managed to escape from jail and serve as an agent for the CIA. He eventually emigrated to the United States.

The man, whose life inspired a number of books and a film adaptation, received the Medal for Bravery from then president Václav Havel in 2001. 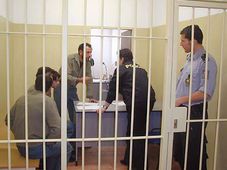 Czechs among people-smugglers arrested in Germany

Police in Germany arrested six people on Saturday accused of being part of a people-smuggling gang. Two of the six were Czech citizens.…

Dozens of people attended a commemorative mass in the village of Lažiště in South Bohemia on Saturday in honour of the late Josef Hasil,…