The chairman of the lower house Lubomir Zaoralek has said that the director of the state run health insurance company VZP, Jirina Musilkova, has faced criminal prosecution because of a disadvantageous 1999 sale of shares of a jewellery making company owned by the VZP. The lawsuit was filed by then president of the Czech medical chamber, now Health Minister David Rath. Mr Zaoralek added Jirina Musilkova was still on the supervisory board of the jewellery making company. According to Mr Zaoralek the lawsuit was suspended because of an expired statute of limitations. Last week Health Minister David Rath put the heavily indebted state health insurer VZP under forced administration and called on Mrs Musilkova to step down. So far she has refused to resign. The state, via health insurance companies, owes hundreds of millions of crowns to hospitals. That’s according to a petition from representatives of… 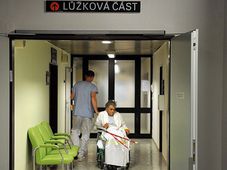 Health looks set to be one of the political battlegrounds in upcoming Czech elections scheduled to take place in October. Some of the… People living in the Czech border regions have gradually got used to the concept of cross-border medical care within the EU. For many…