The lower house of Parliament on Wednesday postponed debate on the bill that would return church property confiscated by the communist regime in the 1950s. Several coalition MPs have expressed objections to the legislation, and the coalition might not have enough votes to pass it. Head of the lower house’ constitutional committee, Civic Democrat Marek Benda, said MPs could start debating the controversial bill in June.

Under the draft legislation, churches and religious groups would receive 56 percent of the confiscated property worth around 75 billion crowns; as reimbursement for the rest, the state would pay them 59 billion crowns over a period of 30 years. 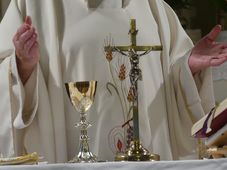 Moravian priest on celebrating Easter amidst a coronavirus crisis

Easter is the second biggest holiday in the Czech Republic after Christmas, observed in most homes around the country. This year however,…