Former US Secretary of State Madeleine Albright is in Prague to mark the 20th anniversary of the Czech Republic’s accession to NATO. She was a leading voice in advocating for expansion of the military alliance to central Europe.

In the coming days, the Czech-born Albright will take part in various events marking the anniversary and discussing NATO’s legacy and current role. She will also present her latest book, Fascism: A Warning.

On Monday, Albright is due to hold a public discussion with former diplomat Michael Žantovský at the Law Faculty of Charles University.

On Tuesday, the anniversary of Czech membership in NATO, she will take part in an international forum at Prague Castle. She is among 14 people who will receive the new Medal of Merit Award for Diplomacy handed over by Minister of Foreign Affairs Tomáš Petříček . 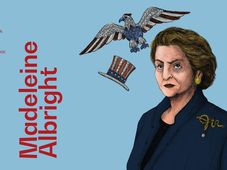 A Czech-American woman who emigrated with her family to the USA after the Communist Coup d'état in 1948.