Police arrested three Turkish nationals traveling on Prague's ring road for allegedly trying to smuggle 22 people from Iraq, Syria and Turkey into Germany; the group was found hidden in the back of their van. The suspects are believed to have smuggled some 100 people or so across the border in the past.

The news was confirmed on Friday by the spokesman for the National Centre Against Organized Crime Jaroslav Ibehej. If found guilty, the trio could face up to eight years in jail. 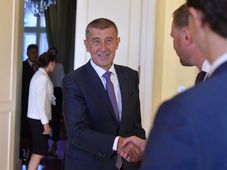