Nedelni svet: Hojdar in danger of being expelled from the Social Democratic Party

The Sunday paper Nedelni svet has written in its latest edition that Social Democrat MP and head of the Parliamentary Committee for the Economy Josef Hojdar is in danger of being expelled from party ranks. The paper outlines two reasons, one being a procedural mistake in Mr Hojdar's election as head of the party district branch in the north-west Bohemian town of Most; the second is opposition within his party to the Social Democrats' so-called left-wing faction, of which Mr Hojdar is a part. Nedelni svet quotes one Social Democrat as blaming Mr Hojdar for helping to bring down former prime ministers Vladimir Spidla and Stanislav Gross. The paper writes that if Mr Hojdar is expelled it could threaten the stability of the government which would lose its slim one-vote majority in the Lower House. 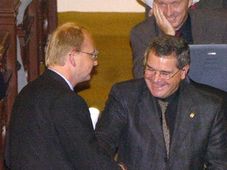 Czech politicians have been competing for attention in an exchange of bitter insults. But should they be trying harder to mind their… 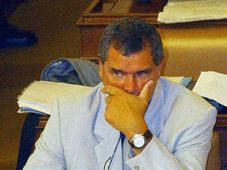 A new political scandal appears to be brewing this week, after Social Democrat MP Josef Hojdar announced that police had discovered…

The summer might be coming to an end but one man who might be still feeling the heat is Prime Minister Vladimir Spidla. With a majority…