New Year’s fireworks to be launched from Letná next year

Prague’s traditional municipal New Year’s fireworks show will this year be launched from the city’s Letná Park rather than from the previous location on the River Vltava, under a plan approved by councilors on Tuesday. Following a discussion on when exactly the New Year’s Day event should be held, the time of 18:01 won in a public vote. Letting off the fireworks from a pontoon between Střelecký Ostrov island and Charles Bridge have led in the past to traffic disruptions. 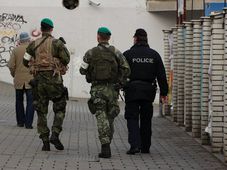