Number of self-employed up in 2012

The number of self-employed people in the Czech Republic grew in the first half of 2012 by 10 thousand, bringing the total number to over 1.012 million people, compared to 1.002 million last December, according to figures from the Czech Social Security Administration. However the number of the self-employed paying for social and health insurance decreased by 6 thousand and 15 thousand respectively. Most self-employed people are residing in Prague, the Central Bohemia and the Moravian-Silesian regions. Companies with one to two employees make up 95% of all business in the Czech Republic. 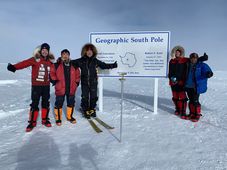 Fifty-four-year old financier, politician and adventurer Pavel Sehnal has become the first Czech to reach both the North and South…