The new US ambassador to the Czech Republic, Stephen King, presented the 2017 Alice G. Masaryk Human Rights Award to Roma activist Čeněk Růžička. According to the embassy, Mr Růžička received the award for his tireless advocacy of Roma Holocaust victims and his decades-long struggle for a dignified memorial on the site of the Lety concentration camp.

The Alice G. Masaryk Human Rights Award was established in 2004 to recognize persons and institutions in the Czech Republic who have made exceptional and continuing contributions to the advancement of human rights. Previous award winners include the ombudswoman Anna Šabatová or head of Transparency International David Ondračka. 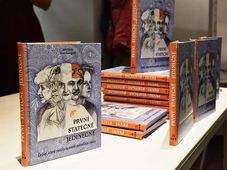 “First-Brave-Unique”: Stories of pioneering Czech women who made their mark on history

One hundred years ago this February, the fledgling state of Czechoslovakia adopted a constitution guaranteeing equal rights for men…