Telecommunications operator Telefonica 02 Czech Republic—formerly known as Cesky Telecom—has recorded gains of more than fifty percent at the half-way point in the year. Profits have reached 4.3 billion Czech crowns, or over $191 million USD. Meanwhile, the company's financial director, Juraj Sedivy, announced that there will be further staff downsizing before the end of 2006, but he refused to offer specifics. The Spanish company Telefonica holds roughly 70% of shares in Telefonica 02 Czech Republic. 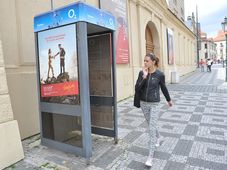