The centre-right TOP 09 has launched an election campaign in defense of parliamentary democracy. Among the party’s stated priorities are curbing the powers of the president, setting a time-frame for the adoption of the euro and boosting the role of education and culture in society. The party also wants to encourage greater civic and individual responsibility, including measures to curb excessive smoking, drinking and overeating. 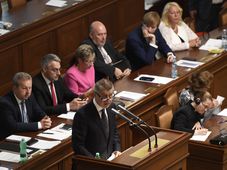 A minority coalition of ANO and the Social Democrats is undergoing a vote of confidence in the Chamber of Deputies on Wednesday. Although…