The US company Central European Media Enterprises (CME) has bought the Czech commercial television channel TV Nova for 642 million dollars in the largest direct US investment in the country. CME announced the deal on Monday and TV Nova's majority-stake owner, the financial group PPF, has confirmed the sale. CME previously held a stake in TV Nova but was involved in a long legal dispute with Nova's former general director Vladimir Zelezny, who is now a Czech MEP. Mr Zelezny eventually broke off all relations with CME and its head, the cosmetics heir Ronald Lauder, in 1999. The news of the sale comes two years after an international arbitration ruled that the Czech state had to pay nearly 360 million dollars in compensation to CME for failing to protect its investment in TV Nova. 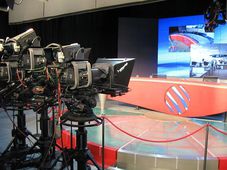 The Czech Republic’s most watched television channel, TV Nova, could be set to change hands. Coal tycoon Pavel Tykáč is teaming up…