President Miloš Zeman met with the chairwoman of the European Trade Union Confederation Bernadette Ségol on Monday and voiced his support for the confederation’s proposal for a single EU-wide corporate tax of 25 percent. Prime Minister Petr Nečas strongly disagreed with the president’s position and said that his government is against the harmonization of direct taxation. President Zeman also agreed with the trade union confederation on progressive taxation, and the need to increase investment that could create jobs as well as the introduction of a guaranteed minimum wage across the European Union countries. 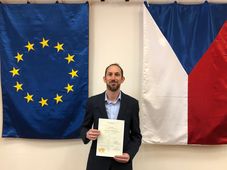