This autumn, the Mezipatra Queer Film Festival will celebrate 10 years of showing gay and lesbian-themed films to the Czechs. The festival is held between October 23 and November 8 in Brno, Prague and several other cities around the country, under the motto “The Third World War of the Sexes”. In this edition of One on One, our guest is the festival’s director Aleš Rumpel who explains what the main focus of this year’s Mezipatra is.

“Every year, the festival has thematic focus; we try to explore a particular theme through films and debates and off-programme events. This year, we call the theme “the Third World War of the Sexes”, and we are looking at how individual people stick to the cultural binary definitions of male and female, and how we are all trapped by the dichotomy of male and female, of masculine and feminine, even in queer communities.”

That’s really interesting because the media often tend to focus only on the issue of how the majority population views the queer community in the Czech Republic. So what are some major issues within the gay and lesbian community?

“There are definitely a lot of issues but we are trying to look at how people reject other people who are not normative in ways that are not understood desirable. So of course there are different kinds of “normative behaviour” for gays and lesbians as well. Certain gay men will reject gay men who are effeminate or camp, and certain lesbians might reject women who wear makeup. This is what we’re looking at, how these ideas of proper masculinity or femininity are well and alive even in gay and lesbian context which should be more open to variety of expressions.”

The expression “Third World War of the Sexes” sounds really very dramatic. Is the situation dramatic, too?

“I think it’s very dramatic for every single person in western culture because the norms are very strict, and it’s really impossible to step across the borders. If you do so, you’ll be punished. Just imagine for instance walking in your office in high heels. You probably wouldn’t make it on your way from home. This is a funny way of looking at it but I think that the norms of masculinity and femininity are really strict, and I believe this is an issue for everybody. If we were more flexible and understanding of what gender is, and more accepting of different gender expressions, I think this would be more liberating for everybody, really, regardless of sexual or emotional orientation.”

Is that the reason why for the first time, the festival is queer, rather than gay and lesbian?

“We have been discussing a change of the sub-head for a long time because of course we don’t only show gay and lesbian filmmaking art and content. But we also have a very mixed audience. Every year, we ask our audience how they identify themselves, and every year we have a very diverse turnout. So people who come to Mezipatra are both gay and lesbian and straight, and the term queer really encompasses different kinds of identities, not only gay and lesbian but also trans or bi or people who are straight but do not really conform to the general idea of normative sexuality.”

Let’s get back to the festival now – what would you say are some of the highlights of the film programme?

“My personal favourite is Derek Jarman, who died 15 years ago, so this is a bit of a sad anniversary. He was one of the greatest queer film makers of all times, I think. Each year, we do a retrospective profile where we look back at a prominent film maker from the past or the present, and this year it’s Derek Jarman. We’ll be showing four of his major films, and we are also doing a special exhibition at the Václav Špála Gallery, which is one of the top Prague galleries. We’ll also be showing his non-narrative experimental films, such as Angelic Conversations and Blue. We also asked really interesting young Czech artists to collaborate in the exhibit. So we have Radim Labuda, who won the Jindřich Chalupecký Award for outstanding artists under the age of 35, and Tamara Moyzes, who does very political and very controversial projects. So I’m really excited about the exhibition and the entire Derek Jarman retrospective.”

You are also showing one of the season’s blockbusters in general terms, Brüno with Sasha Baron Cohen. Is that rare, that a majority movie finds its place in your festival as well? 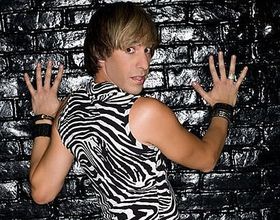 'Brüno' “Well, there haven’t been many of those, there haven’t been many gay films released in Czech distribution. We decided to include Brüno because it really works for the theme of the Third World War of the Sexes because the main character is really very camp and blatantly different, and I think it’s very unacceptable to many gay people in the Czech Republic who want to appear as normal and ‘respectable’ as possible, so I think this will really work within the programme.”

This year, you have a block of documentaries from the FAMU film school as well as a Czech TV block. But what about Czech feature film? Do Czech filmmakers produce movies that would be somehow interesting for you?

“There have been only few, but the film Dolls, or Pusinky in Czech, actually received a special mention by the jury a few years ago, and this is the reason why we’re bringing the film back. We’ve prepared a special selection of films that we’re showing on-line so that people within the Czech Republic can watch feature-length films that received the main jury awards in the past. And Pusinky, having received a special mention, is one of the films people can revisit on our internet special website.”

The Mezipatra festival started in 1999 in the city of Brno, and only spread to Prague four years ago. Is the Brno queer community more active than the one in the Czech capital? 'Pusinky' “I would say that overall, Brno has more of civic activism or civic life. Some major NGOs are based there, such as Duha, that does environmental project, or Nesehnutí who do social activism. It’s probably important to mention that Brno has about 60,000 students in a population of 400,000, and there is a lot of youth movement going on. So I think that the reason why there is so much gay and lesbian things going on in Brno as opposed to Prague – superficially looking at it – is the overall civic spirit of the city.”

Well that spirit did not show very much this year at Brno’s city hall as you did not receive financial support from the city. But the festival is still held under the auspices of Brno’s vice mayor. Does that mean that city officials are divided over the festival?

“Absolutely. We’ve had sort of fluctuating support from the city in the past ten years. There was a year when we got 5,000 crowns of funding from the city council, and the support we are receiving this year is from the Green Party and from Brno 2006, which is a group of independent council members. There is a coalition at the council, and the Christian Democrats have traditionally been very strong in the city of Brno. They have publicly stated that the reason we are not getting funding this year is because we are gay and lesbian film festival. It’s not a secret that the conservative parties in Brno are opposed to the festival.”

More information about the Mezipatra Queer Film Festival cab be found at www.mezipatra.cz.