Matthew Stillman is the boss of the Czech Republic’s biggest production company for foreign films, Stillking Films. It has produced some of the blockbusters that have tapped into Czech skills and locations over the last 15 years. At his main office in the heart of Prague’s Barrandov Studios, I asked Mr Stillman how he came to the Czech capital in the first place.

Matthew Stillman “Well, originally I came to visit a friend who was teaching English. And his English was not very good even though he was English. I was sleeping on his floor. I could not work in England at that time, I had just finished a politics degree. I was looking for something to do and I knew I wanted to do it in the production area. So while I was here I looked, together with another friend that was staying with us, and it just appeared that there was an opportunity here. Essentially, at that time it was the last big recession, 1992-1993, so it was difficult to get work in England. While the film industry in England looked like it was receding. Here, it looked like there was an opportunity for it to expand and develop and there were not many obstacles to that doing here. There were not many obstacles in terms of the competition to doing that here. There was no major legislation that was restrictive. It had not been developed, so there was a sort of a void. But there were studios, there were some crews and it was cost competitive. So we had a look around and decided to give it a go because we did not have much to lose. So that is really how we started with a typewriter, and an answering machine and a phone at Barrandov.”

How is it you came to be interested in film because, as you say, you studied politics? It does not seem so logical.

“Politics does not lead to much, unfortunately. I loved the politics for the broader education but it was not a vocation. I wanted to do something that was fun as well as earning a living at that time. I had always been interested in film and production and thought that would be an interesting area. It was a natural thing for me to look for and to try and eke out a living in.”

If I understand correctly, when you first came here you were not immediately involved in film. You were involved with a nigh club which was to raise money. What was that? 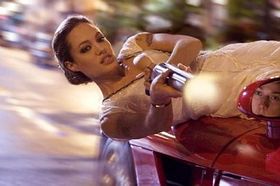 Angelina Jolie, Wanted “That’s right. We set up the office but we did not have any income. It was not much of an office, it was two people and a table, but we needed to cover costs, the rental of the place and things like that, and accommodation. The friend I originally came to see was a DJ who was doing some DJing. So, together we set up a little group and did a few nights in different places. And that led to doing a night in a place called Slovanský Dům on Na Příkopě. That took off very quickly and overnight there were a 1,000 to 1,500 people a night there. It got a bit wild a bit quick. We got a couple of crowns together to pay for the office and after that summer I left it because it was a 24-hour occupation at that time. I started focussing on the production set up. Fortunately, we had our first production here which was a production for K D Lang. So that sort of kicked off that side of activities.”

But how difficult was it to persuade people they should be doing business in Prague because, if I understand, for many people Prague was not really on the map for them?

“Yes, there was unfortunately, bizarrely, a lot of people who did not know where Prague was, mainly Americans and I am talking about Americans involved in the film production industry. So they were a bit confused about what was the whole proposition that I was trying to make to them when we flew out and tried to market Prague and the Czech Republic. The key really was that the first couple of projects that shot here found the creative and financial benefit of doing that and were able to act as a reference. The industry is pretty fickle in terms of where it shoots and how it shoots. So, once we had a couple of projects under our belt that acted as good references to the potential and the strength of the crews and locations, all these things, that helped and acted as our calling card.”

How important is Prague as a location, as a backdrop for films? In the early days was that really important or help a lot or are things really studio-based?

Casino Royale “No, I think we have done about 45 films and I think probably three or four of all these were purely or ostensibly studio-based. The rest of them double Prague for different places. For example, Wanted which we recently shot with Angelina Jolie was using Prague for Chicago; Van Helsing was a fantasy world from hell; the film with Jonny Depp and Heather Graham was doubled for London; Tristan and Isolde was double for London and Ireland; Nania again is fantasy, the Lion, the Witch and the Wardrobe; Triple X was partly Prague, partly the US; the Bourne Identity was France and Switzerland. So it is a pretty eclectic mix of places Prague has double for.”

Do you think that is something specific to Prague?

“Yes, it is. Obviously it was relatively untouched during the war. And the period when building was done in the Czech Republic and the architecture that came from that allows it to double for a lot of things, as well as the country. So it does have a unique advantage in that context.”

Technically, how much is done outside these days and how much is now in the studio? Obviously it depends from film to film, but generally what is the trend?

“It is not specific, it does really vary. Casino Royale, which was shot here, was about 70 percent location and about 30 percent studio. And I think that is probably typical. The same was true of Wanted – the Angelina Jolie film – and Prince Caspian. It is from 50:50 to 70:30 in favour of location work I would say.”

“Prague from 90 percent is about 20-25 percent of that actually. Like you say, we have offices in different places; Cape Town, Chile, Germany, France – all different places – New York. So, it is natural, as we get involved in other places it naturally decreases the focus on Prague. I am still based here and we try to base things from here. But together with the issue of film incentives and an expanding desire of the ad world to be in different places, it has meant the Prague part of our business is reduced although the business has increased. But I would like to maintain and develop in the Czech Republic as long as possible.”

Generally, the film industry worldwide at the moment, is it experiencing the recession or are people spending to get away from the recession?

“Well, normally the film industry increases its sales during a recession. That is true, that has happened theatrically. But you have two things going on: you have got, one, the recession; secondly, you have got the change in the media and entertainment and how people consume entertainment and media and what is produced for them. On the recession side, you have got, yes, an increase in theatrical admissions but you got a reduction in DVD and video because people are looking to other forms of media, primarily the Internet, for entertainment. Also, what you are seeing now is a lot fewer, bigger films being made by the studios, tent poles ones based around a couple of very specific elements normally involving entertainment for kids or video gamers. So the type of feature being made has changed and the lack of money being generated in the private sector means that the financing for independent films– which is in the range of from zero to 45 million dollars – has fallen through the floor at the moment.”