Tour company Eat With Locals allows visitors to Prague to do just that, taking them to restaurants and cafés they might never find on their own and giving them the lowdown on various aspects of Czech food culture and more. The firm was started last year by Lenka Pavlíčková, who has both a background in business and a deep passion for food and travel. When we spoke at a café on Wenceslas Square, I asked Pavlíčková what kind of people were signing up for the Eat With Locals tours. 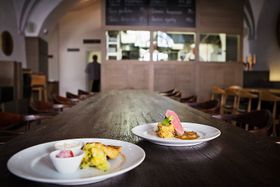 Photo: Martina Berini “Typically we have guests from the US. They’re the large majority. They travel individually usually.

“Then we have guests from Australia, from the UK. European guests – from Germany, Austria, Scandinavia – are the minority.”

Is part of what you offer not just food advice and tips on where to eat but companionship? Are your guests looking for company, to some extent?

“Yes, exactly. I think food is one part of what we offer. They have made their reservation because of the tour, but also I think they are looking for somebody local who would show them around, who would tell them how it is to live here in Prague and in our country.

“They also ask how it was during communism. I am younger, so I cannot remember everything exactly. I don’t have direct experience but I know it from my parents and I remember some things.

“It’s enough to explain to them what it was like in shops, what the selection at restaurants was, how we couldn’t travel at all to the West.

“So yes, they really want to be with somebody who is local and can explain to them how it is to be local and to live here in the Czech Republic.”

One of your tours is to central Prague and the Old Town. What type of places do you visit on the tour?

“Our concept is to have a tour with some continuity. So we start with some finger foods and snacks like chlebíček, or open-faced sandwich, then we go to a butcher’s shop and have some sausages, some meat products…”

What butcher’s shop? You say on your website that it’s one of the best in Prague – which one is it? 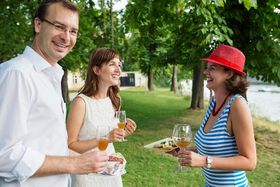 “Yes, on Dlouhá St. I like it because they don’t just sell products, they have small hot dishes so you can pop in there for a quick lunch or dinner.

“We like to shop there because we don’t prepare meat dishes very often at home but if we do we go to shop there. Or if we’re craving for something meaty it’s the ideal place. I like the smell there. The service is nice.

“So yes, we go to Naše maso. Then we visit the restaurant Katr where they do great trout and they have nakládaný hermelín, or pickled cheese, and aspic, or tlačenka.

“We go to these kinds of places, where locals like to go despite the fact that these places are usually in very touristy areas of Prague.”

And in these touristy areas the vast majority of restaurants are terrible, right?

“Yes. Usually if I look around during our tours I see many restaurants saying, Traditional Czech cuisine, and then you see the prices of these places – they’re impossible. Sometimes it’s much too much.

“Also we went to check out some places and the quality of the Czech cuisine was not that good.”

As well as the tour of the Old Town and central Prague, you have a tour of Karlín. Of all the areas outside the centre of Prague, why did you choose Karlín? Photo: Martina Berini “Because it’s a nice, small, developing district. Since the floods [in 2002] Karlín has made quite big progress. Every week almost a new place opens.

“It’s nice to show it to tourists because they don’t know about it. If they don’t have a hotel there, they pass this area.”

I think a lot of Prague residents would also be interested to know what places are good to go in Karlín.

“Sure. I can recommend Krystal [Mozaika] Bistro, which is a Czech-French bistro. They have influences from both these cuisines. I can really recommend their fruit dumpling. It’s the best in Prague.

“I also like Simply Good. It’s a small bakery where they do a typical Moravian frgále. Then Můj šálek kávy, a nice café, which is great for weekend brunches. Or Veltlin, a wine bar.”

When you do the tours, what particular foods or drinks do the participants really like?

“It’s roast beef with sweet-sour cream sauce and dumplings. Then they like beef tartar and meatloaf, from Naše maso.

“They have seasonal menus at the restaurant we go to, so the dessert menu changes almost every season. Now it’s caramel cream pudding and they love it. It’s the most popular dessert. 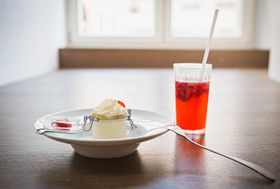 Photo: Martina Berini Typically what do visitors expect from Czech food? And how does the reality compare to their expectations?

“Sometimes they just think that Czech cuisine is not that good. They think it’s all about sauces and dumplings, and that we eat a lot of pork.

“Overall they think it would be something which is not that good and they see that it can be. And also that it can be a modern cuisine as well – you can see some modern patterns in our cuisine.”

Are there any foods that people are reluctant to try? Which they look at and go, I wouldn’t like that.

“It’s aspic or headcheese. In Czech tlačenka. When I say that they’ll be eating headcheese, they usually think they will be eating parts of the head.

“That’s how it was in the past. When they killed an animal, they used every part – including the head – for tlačenka. But these days they use fine parts of meat [laughs].

“Also the texture of this dish – meat in jelly is not for everybody. So they usually look at it… It happened one time that a lady recommended that we remove it completely from our food tour.

“But that would be a pity. It’s part of our food tradition and it’s nice just to try it.” 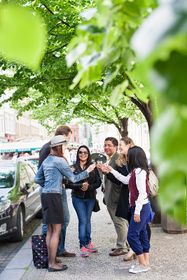 Photo: Martina Berini “I like the restaurant Čestr very much. Their beefsteaks and other meals are great. If you like little buns in vanilla sauce, it’s the right place to have it.

“Then, although it’s been on our gastronomic scene for a long time, we have just discovered Atelier Red & Wine. They have French cuisine.

“As I mentioned already, I like Krystal Bistro. And from cafés… I like Můj šálek kávy, EMA espresso bar in Florenc, the Mama Coffee chain.

“Also if I have a coffee I like to have something sweet, so I go to IF Café, Iveta Fabešová’s sweet shop – they do great French pastries.”