In today's One on One Jan's guest is Ewan McLaren, a Canadian who has lived in the Czech Republic since 1990. For sixteen years Ewan - trained professionally in the theatre - has worked as an actor, director, and finally producer - with such companies as Prague's Studio Ypsilon and the cutting-edge Alfred ve Dvore - The Alfred in the Courtyard Theater. In the interview, Ewan discusses not only his approach to stage performance in the Czech Republic but also his overall fascination with Czech culture. Ewan McLaren - One on One.

"I actually came to what was then Czechoslovakia, in 1990. At the time I had very strong impressions about the cultural scene here, and that's possibly what attracted me more than anything else. Of course, in Canada we mostly had access to things that dissidents had written, and things that were written in the 1930s - so I liked Capek but also Havel and Kundera and these authors kind of fed my imagination about this culture and this country, as it was then. This paved the way for me to actually come here and it happened that I was just finishing theatre school at exactly the same time as the changes that took place here [in 1989]."

What part of Canada are you from?

"I grew up in the west - in Calgary - but my theatre school was in Toronto. And, I guess I originally thought I was going to stay in Toronto but after those four years of study I just realised that the world was much bigger than 'just that' and that there were so many things happening in this part of the world that it would be a mistake not to come here."

Did you get involved in theatre in Prague from the get-go?

"After a couple years where my bread-and-butter was teaching English I got quickly involved with the Studio Ypsilon Theatre, which is a very popular comedy and music oriented theatre. And, they actually asked me to perform in a play. At that point I decided that I was going to stay for much longer than just a couple of years, and that I was going to focus on directing. Because, I was acting on stage in this performance and part of the 'charm' of the performance was my bad Czech at the time!

The Czechs were playing Americans, and I was playing a Czech immigrant to the US, so, everything was turned upside down! I decided that by focusing on directing - something which had always interested me - I was going to have a chance to leap the language barrier. A year later I was directing my own productions in Czech."

Who were some of the authors, for example?

"George F. Walker, from Canada, Christopher Hampton from the U.K. who wrote a play called 'The Damned Poets' about Rimbaud and Verlaine, and Sam Shepard from the U.S."

"After an intense period when I was directing a lot of plays for a lot of different Czech theatres, I kind of bumped up against some limitations: I realised that there was much more that I wanted to do in the theatre. For The Czech drama theatres - which have their own permanent companies of actors - are great. They are still very popular, the audiences till come, there are a lot of connections between the audience and actors on stage. And yet, they don't really cross borders in a lot ways: I mean the borders of both the Czech Republic and in the arts. What you can do in the arts. I realised that there was so much more that I wanted to be involved in, and I was meeting other artists who were frustrated about the situation and wanted to do so much more.This was about seven years ago.

And, I decided that what had to happen was that some people had to focus on producing: working with independent artists with independent ideas who wanted to do independent things. I decided that I had to be one of those people who was going to focus on producing. And, I went back to Canada for a while and worked with some really cool companies and worked with some festivals and got a good taste for what independent artists can do if they have the right infrastructure and the right freedom."

Photo: www.alfredvedvore.cz "Then I came back to the Czech Republic and started working with this theatre Alfred ve Dvore - the Alfred in the Courtyard. It's a theatre that we have insisted on keeping as an 'open' theatre where artists can come with ideas and try something!"

What are some projects that were presented to you that made you think "Wow, I haven't heard of anything quite like that before"?

"Well, we were approached by one director who said 'I want to take a group of actors into peoples' homes and I want to make that home the subject of an 'archaeological dig' and I want to base the performance on what we find in that home! And I want the audience to sit in this home and enjoy the performance! Will you help us do this? And we said 'okay' {laughs}... whose homes?

And he said 'well, it has to be someone who is brave enough to invite not only his friends but also total strangers into his house, to see a performance that could be about things that are actually quite intimate to him or her. And we found several different people willing to take this risk.

This group of four performers and this director have now been into five homes and presented performances where audiences were on platforms looking through the windows! Or were sitting on the floor in the living room!"

"One of the companies that I've worked with that I think are the best are called Handagote - which is the Japanese word for soldering gun. All the members are Czech and they work with this idea that Czech people - especially under the communists - in order to get things done in their house had to learn how to do these things themselves. So, they learned how to use a soldering gun, they learned how to fix this radio, how to fix that broken piece in the wall or this piece of electronic equipment.

And these guys take the idea of D-I-Y and apply it to all kinds of performances where you have all kinds of odds-and-ends and bits-and-bobs of technology on the stage - directly interfaced with performers on stage. So, there's this great dancer Veronika Svabova on stage in a performance called 'Noise' where she's surrounded by electronic and technological equipment that actually registers her movements. So that when she dances this way or that way her movements turn lights off and on, they make sounds, they even turn on a soldering gun, or turn on a heating element.

Photo: www.alfredvedvore.cz And it's funny! She's like an F14 pilot who is just learning to control all of the things around her. And yet, it's nothing sophisticated: it's all this technology that we know and are familiar with from our own homes. In a bizarre way it's kind of 'calming'. And pleasant."

The demands on your time and energy and resources must be very different now than they were before, going from being on stage, going into directing, and ending up in producing.

"Right now is a really exciting time in Prague and the Czech Republic for the arts - not just the performing arts but arts in general. It feels like much more than just a cultural job, it feels like we're part of an evolution, part of changes that still need a lot of effort."

Prague is pretty much home, isn't it?

"Prague is home. I have a family here - we have a small son who is 5 and thoroughly bilingual. You now, we do consider ways that we'd be able to go back to Canada at some point in the future so that he can have contact with his grandparents and our family there. But, our base is going to be the Czech Republic. Prague is our city!" 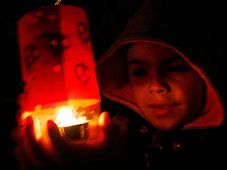 The Mexican holiday Day of the Dead brings together the world of spirits and the world of the living. Celebrants spend the days from…

If you want to visit a theatre in Prague, summer is not the best time. Even though there are dozens of theatres in the city performing…