Historian Matěj Spurný: Anti-humanist atmosphere is spreading – and we must fight back

At the start of this year historian Matěj Spurný came in for a great deal of online abuse – and even death threats – after an interview he gave a magazine headlined This country is not just for Czechs. Spurný’s work is focused on issues of nationalism and identity and he is a co-founder of Antikomplex, a group advocating for a more critical look at the post-war expulsion of the country’s German minority. When the Charles University academic visited our studios I was curious to know, given his specialisation, about his own family background. 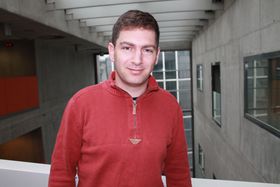 Matěj Spurný, photo: Ian Willoughby “I think the family background of many of us in the Czech Republic is quite interesting and not, let’s say, homogenous, and that’s my case as well.

“My father’s side came from southern Moravia and they all identified as Czech. But actually my father’s mother, my grandmother, they spoke German at home.

“Though they spoke German at home they somehow identified themselves as Czech. I think that was quite characteristic, quite typical, in southern Moravia in the first half of the 20th century.

“My mother’s side was a Jewish family. I think they spoke both languages, Czech and German, and maybe some Yiddish.

“My grandfather on my mother’s side came from Ostrava, Silesia, and my grandmother came from eastern Bohemia.

“They were both from Jewish families and they actually met in Theresienstadt [Terezín].”

The first time I spoke to you many years ago it was in connection with your involvement with the group Antikomplex, which you founded. What is Antikomplex and what does it do?

“We founded Antikomplex in 1999. At that time, as high school and university students, we met several times in 1997 and 1998 and we discussed in particular the issue of the post-war expulsion of Germans.

“We still felt at that time in the late 1990s that actually critical voices concerning the post-war expulsions are somehow rare or are on the margins, and that many people just don’t know enough about that topic.

“Expulsion from your home is always tragic, but maybe an even bigger problem was caused for Czechoslovakia – from today’s perspective – than for the Sudeten Germans.”

“We thought, and I think we still think, that it’s not only a topic of, let’s say, history, for historians – but that the post-war developments have somehow been decisive as regards the identity of Czech society: We got rid of the Germans, during the Nazi occupation most of the Jews were killed, and this was the path to quite a homogenous society.”

If we can speak about the perception of the expulsion of the German minority after WWII, my impression is that most Czechs, even if they recognise that atrocities did they place, fundamentally don’t have a problem with the expulsions. What do you think are the forces that have shaped that view? Why do so many Czechs seem to feel that way?

“On the one hand, it’s quite understandable, because the post-war expulsions and ethnic cleansing was a part of the shaping of the post-war order, in which we are still living in Europe.

“It’s not so different from how people in some other countries look at some post-war atrocities.

“At the same time, maybe this perspective on what happened after the war is even less critical, or was for a long time even less critical, in the Czech case or in the Central and Eastern European cases because it was shaped massively in most cases by the immediate post-war rhetoric, which was present everywhere, but then after that also by the Communist propaganda or Communist politics of history.” 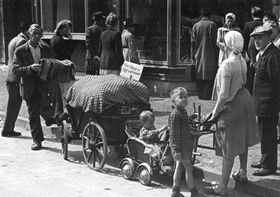 Expulsion of Sudeten Germans, photo: Bundesarchiv, Bild 183-W0911-501 / CC-BY-SA Some people might say the homogeneity of Czech society has brought a kind of stability – that if you have very large minorities it can lead to perhaps to tensions when it comes to coexistence. What would you say to that view?

“OK, I think it’s somehow true. It did bring stability. But you know the Berlin Wall also brought stability to the GDR [laughs].

“So I would say that not everything that brings stability is a great gain.”

What do you say to the idea that many of the Germans who were expelled ended up in Bavaria and in Bavaria they were living in one of the richest places in the world, but if they’d stayed here they would have had four decades of communism… maybe they were better off being forced out?

“Bavaria was not one of the richest places in the world after the war.

“When these people were expelled they ended up in a country destroyed by war, in a very poor, agricultural region.

“And many of them didn’t have their own house, their own roof over their heads, until the early1960s, which was 15 years after the war.

“On the other hand, many people, especially the younger ones among the Sudeten Germans, really succeeded in German society.

“So we cannot say that it was… well, expulsion from where you are at home is always a tragic thing, but maybe an even bigger problem was caused for Czechoslovakia – from the perspective of 2017 – than for the Sudeten Germans.

“Especially for the younger ones and the next generations that came after the expulsions.”

There was also quite a lot of migration inside Czechoslovakia after the war, right?

“First you had to motivate people to go to the borderlands, from where three million people had been expelled.

“People came from the central parts of Bohemia, of the Czech lands, to the borderlands, and many of them tried to begin a new life there.

To get a free house?

“Well let’s say to get rich. They returned quite quickly with a lot of property from the borderlands. It was quite a chaotic time.

“And it wasn’t only people from central Bohemia who came. There were also people from abroad: Czech immigrants to Poland, Ukraine, the then Soviet Union or Romania and other countries who were motivated to come back to their homeland.

“Some 200,000 people came as re-émigrés back to the borderlands. 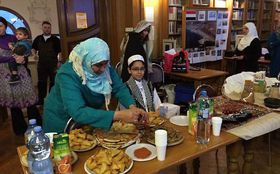 Photo: Gabriela Hauptvogelová “Also inside the state Roma from Eastern Slovakia came to the former Sudetenland.

“So there was a lot of people on the move – around five million.”

Moving forward to the present day, after 1968 alone many thousands of Czechs were forced to emigrate and many, many thousands of families were affected. But today many Czechs seem to have a kind of antipathy to migrants, many of whom are facing something worse than the Soviet invasion – they’re facing the genuine threat of death. How do you explain the unwillingness of so many Czechs to take in foreigners?

“Actually, it’s quite a complex problem. One thing which I already talked about is this self-perception, this self-definition of our society and country as sort of homogenous.

“This leads people to be afraid, afraid of anything which comes from abroad, which is different.

“Actually it starts with the relationship between Czechs and Roma, who have been living on the territory of the former Czechoslovakia for centuries but are still not accepted.

“The other aspect is, let’s say, the Muslim immigration, where people are even more afraid. Because they are people who are coming from countries which are really very different.

“They are people who are quite often orthodox believers, coming to a very secular country. That is another important aspect.

“Antipathy to migrants starts with the relationship between Czechs and Roma, who have been living on this territory for centuries but are still not accepted.”

“And all this happens after a time when the neo-liberal ideology was very dominant in this country, and not only in our country but also in this whole space.

“So the issue of solidarity and humanity is somehow weakened in the public space, I feel.

“It’s a big difference also in comparison with the early 1990s, for example.

“In the early 1990s, 5,000 Muslim immigrants came from Bosnia and other parts of the former Yugoslavia came to Czechoslovakia and then to the Czech Republic.

“And actually it was no problem. But today even some dozens or hundreds of Muslim migrants who are leaving places where there is war and where they are frightened of death are somehow not naturally accepted.”

Is race a factor in this? Muslims from Bosnia are white people.

“I don’t think so, really. In politics and in the mainstream there is not much of this pure racism, I would say. It’s more about xenophobia than about racism, I think.

“People are afraid not because the people who are coming are black but because they are Muslims and they are socialised in a totally different way.

“Of course the issue of Islamic terrorism is somehow being used or misused by politicians.

“There are very many politicians in the whole of Central and Eastern Europe, especially in the Visegrad countries, who have learned to use people’s phobia in a certain way so they can profit from this fear. 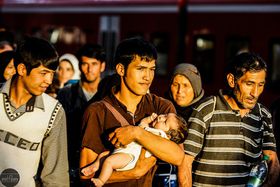 Photo: CC BY-NC-SA 2.0 “So it’s a sort of a cocktail of a certain political culture, of some longer traditions, of isolation and homogeneity and of the issue of Islamic terrorism.”

One reason I wanted to talk to you was that recently there was an interview with you in a Czech magazine entitled This country is not only for Czechs. Tell us about the reaction to that interview.

“Well, people were quite angry reading that, I guess. Not all – there were also readers who really liked it.

“But many people wrote me emails and even more people commented on the web, and especially on my Facebook profile – they were very angry.

“Some people also wrote that I should be killed or they are going to do it. It was really an aggressive reaction.

“I’m used to negative reactions, because I have been contributing to a critical discussion about post-war history since the late 1990s. A lot of people react negatively to what I am doing, or to what we were doing, in Antikomplex.

“But this time it went further. People were sending me to Auschwitz, in the context of my family background or threatening me with death.

“It’s definitely because of the kind of media, the social networks, which enable people of a certain kind to reaction in such a way.

“At the same time I think it’s because of some negative emotions that have some, let’s say, political backing.

“Some people of this kind feel that their time is coming or that they are stronger. Which is actually the danger.

“I don’t think these particular individuals are dangerous and I won’t let myself be threatened by them, at all.

“But I think this atmosphere, this anti-humanistic atmosphere, is somehow spreading in the public space. And this is dangerous and this is what we have to fight against.”