Martin Hosták is one of Czech TV’s most popular hockey co-commentators, a job he took on after a successful career in Czech hockey, the NHL and in Sweden’s Elitserien. In this edition of One on One, we talk about his years on the ice, his current TV work as well as Czech hopes for a medal from the hockey tournament at the upcoming Winter Olympics in Vancouver. Looking back at the time when he first appeared in the Czech extraliga in the 1980s, Martin Hosták says the game has completely changed.

“You can’t compare it. Ice hockey has developed a lot; it’s much faster, the players are much more versatile – they can play in defence and in the attack at the same time. It has also changed a lot due to technology – nowadays we have better sticks, skates and everything else. If you look at goalies in the 1980s and now, you’ll see the difference at first sight. So technology makes a lot of difference but the players are also better skaters, they are much better prepared for the kind of hockey that’s played now, which is more physical, more contact, and it’s also faster.” 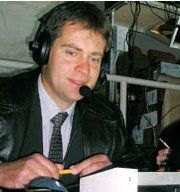 Martin Hosták, photo: www.ceskatelevize.cz Would you say that the role hockey plays in the society, the crowds it draws, is that different now?

“I think it’s quite similar, but still, it was more of a phenomenon back then, because people here in the late 1980s had not much fun things to do round here. So I think hockey was bigger then, as now everybody can follow their own interests, have much bigger opportunities, they can travel, so hockey was more of a social phenomenon it the late 80s then it is now.”

Speaking about opportunities that opened up after the fall of communism, you moved to the US in 1990 to play for the Philadelphia Flyers. How was it for you, having grown up under communism?

“It was a big shock. Culturally, of course, because we had to learn everything that’s normal now, like using a credit card, ATMs, and so on. So everything was a problem but we got through it quite well with my wife. It was very interesting for us, we were young, and when you’re young, you always deal with change better.

“Another aspect though was hockey itself which was quite different from what we played here in Czechoslovakia. In the NHL of the 1980s and early 90s, hockey was more physical, with a lot of physical contact, the rules were different, there were more rules against slashing and hooking and so on.

“So it was more difficult for European players to become stars in the NHL than it is now, because now hockey is global and European hockey is closer to the NHL. I think it’s easier for Europeans to play in the NHL now that it used be before.”

Nearly ten years ago, you ended your career for health reasons but you immediately got another job – you became an expert commentator for the public broadcaster Czech TV. How was the transition for you? What it more difficult than you perhaps thought it would be?

“It was easier than I thought it would be. But I still played hockey when I was first on TV as a co-commentator with Robert Záruba. It was in Stockholm in 2001 at the Swedish Hockey Games. It was my last season in Lulea, and Robert asked me if I could help him out. It was not that common to have two commentators for international hockey games, one ‘professional’, as we call it, and the other ‘expert’, a former hockey player. I thought, ‘Ok, I have a couple more seasons ahead of me, but why not try something new, something interesting’. I don’t have a problem talking, and Robert and I had been talking about it since 1987. That was when he was at a junior championship for the first time as a TV reporter, and I was there as a player. It was in Slovakia, and we first talking about commenting. And then we met so many times after that at world championships, and then he asked me if I wanted to jump in as a co-commentator.”

This season, the Czech O2 extraliga seems to draw bigger crowds than it did in previous seasons. Do you see a corresponding bump in the quality of the game as well?

“No, I don’t see any rise in the quality of the hockey, but I think that the entertainment is much better. Arenas are being renovated and new ones are being built, so it’s a better environment to go see a game. If you live in Kladno or Litvínov and you go see hockey, you don’t have the same comfort as you do in Prague or in Pardubice, Liberec and České Budějovice where they have new arenas. So that’s one thing which makes hockey better. Then you don’t have the problems with hooligans like they do in football, so it’s fun for the whole family. And also, I think, extraliga is getting more balanced. You don’t have one team which would be so much better or worse than other teams. And when the games are even, it’s hard to predict who will win and it’s fun to watch.”

Coming back to international hockey, the 21st Winter Olympic Games will start later this week in Vancouver. How do you see the Czech hockey team and the chances we’ll stand there?

“Well, we are not the top favourite. There are the Russians and the Canadians; they are my favourite for the finals. But there is a pretty good chance for a medal if everything fits into place and if every player is in top form. Most important I think will be what the form of [goalie] Tomáš Vokoun will be during the Olympics. And there are not many games to waste – there are only three games in the group stage, so we will see. But the favourites remain the home team and the Russians of course.”

The captain of the Czech team will be Patrik Eliáš of the New Jersey Devils, but the attention will focus on Jaromír Jágr, for whom it’s the last major tournament. Do you think that his magic will do the trick?

“He’s still a great player, he can still do some incredible things, but you can’t stop ageing. I think that if the Czech team should get onto the podium, it will be Patrik Eliáš who will have the leading role. He’s capable of that, he has shown it in the New Jersey Devils, and I think he’s someone who can lead the team. Jaromír Jágr gets a lot of attention and he knows that, which could help Eliáš and the others to be good as well. But I think that the most important man is Tomáš Vokoun, anyway.”