Hockey star Patrik Eliáš: “You can’t get comfortable when you’re at the top”

The Czech hockey team failed to grab a medal at this year’s World Championship in Switzerland after being eliminated by Sweden in the quarter finals. The disappointment came despite the fact that the Czech line-up included several stars of the NHL, arguably the best hockey competition in the world. One of the players who joined the Czech squad in Switzerland is Patrik Eliáš, the forward of the New Jersey Devils and our guest in this week’s edition of One on One. 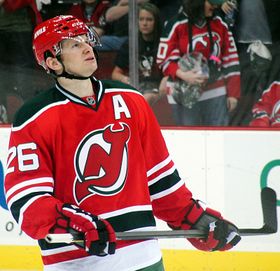 Patrik Eliáš, photo: Michael Miller, CC BY-SA 3.0 Everything seemed fine after you joined the Czech team for three games in Switzerland but then came the defeat by Sweden in the quarterfinal. What went wrong?

“Well, it was obviously a disappointing result. We had a good squad, lot of good players. But I knew before I came in that there were problems winning tough games, and that’s what it came down to. We beat Slovakia and Belarus but couldn’t get it down against Sweden. They played well-organized hockey against us, and I think that we relied on our skills too much but sometimes it takes a lot of hard work to get the job done.”

It’s interesting that you mention hard work because after the loss several analyses appeared, and some said Czechs were not hardworking anymore, while others argued it’s a natural decline after all the successes of the golden generation of the 1990s. What do you think is wrong with Czech hockey, if anything?

“Well, I don’t think we have enough time to talk about it and analyze it, but you know, hard work is always there because otherwise we wouldn’t be able to play in the NHL, which is the best organized competition. In the 1990s, when the Czech Republic was very successful, the core of the team was always there for the next years. And I think that a lot of the young guys weren’t getting their chance and weren’t brought in to get the experience and perhaps to get the feel, so maybe in a few years they can be the leaders. We still have a lot of talented players – not as much as we used to which is a big problem because it shows in the numbers, how many guys were drafted it the NHL, and in our results in the world championships at both junior and senior levels. It is a problem that needs to be addressed. I think that we’re some three, four, five years behind. Everybody strives for perfection and you cannot get too comfortable when you’re at the top, and I think that’s what happened. In Czech hockey, people always thought it was going to come natural. When you look at other teams, Canada for instance, they’ve always been the best, and even when they got silver medals, it was never good enough.”

You were drafted into the NHL in 1994. What’s the process like?

“In my years – I was born in 1976- there were few guys ahead of us that had been drafted, and that opened up the path for us into the NHL, so it was a little bit easier for us to get in. But we still heard a lot of voices saying, ‘these guys are coming from communist countries’. They made it tough for you. But at the same time, it was the only way to get out, and maybe to have a better life at that age. You either had to be an absolutely brilliant kid, or play some kind of sports, and for me, it was hockey. I didn’t know what to expect when I got there and it was a great learning experience, not just hockey-wise but also life-wise. It helped me a lot in my life.”

You have spent 14 seasons with the New Jersey Devils. Have you ever thought of playing for another NHL club?

“I have. Two years ago, when I was a free agent, I had a chance for the first time to explore the free market and see if there was interest from other teams and possibilities to play for another organization. I did hear from several teams and I weighed out the options but at the end of the day, I felt like I had been successful in New Jersey and it became my home. There were lots of aspects that were important in the decision: it was relatively close for my family to fly in directly from Prague, the travel isn’t that bad in the NHL on the East Coast, but the most important thing is, I have been there for 14 seasons and I never missed the play-offs, and even though that we haven’t been doing that great lately, you still have the opportunity to play for the Stanley Cup. So loyalty and winning played the biggest role in my decision to stay there.”

Do you live close to the Continental Arena, the home of the New Jersey Devils?

“That where we used to play; I played there for 11 years. In the past two years, we have been playing in a brand new arena in downtown Newark, it’s called the Prudential Centre. It’s beautiful, it’s the newest arena in the NHL, and fans love it because it’s downtown and they have more things to do before and after the game, they can hang out. For me it’s a 15-minute drive from the town where we live.” 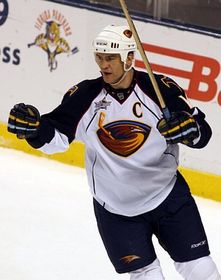 Bobby Holik, photo: CTK Your friend and former team mate Bobby Holik announced this week that he’s retiring after 18 seasons in the NHL. What do you plan to do once you stop playing hockey?

“First of all, I was very sad to hear that because he was a great mentor to me. He was already there when I came and he helped me with many things, on and off the ice, and I was very happy to see that he came back last year. I was a little disappointed to see the way he was treated at the end of the season, and obviously unhappy to find out that he’s retiring because he’s done great things for the New Jersey organization. “

“Me personally, I still have a four year contract, but I know it’ll be over quickly. Right now, I attend a school to get my coaching licence, just to make sure that when I’m done, I have various options. When you live with hockey for 26 or 27 years, staying with it would be the right thing for me to do.”

You have lived outside the Czech Republic for most of the 14 years you've played in the NHL. Has the time spent abroad changed the way you look at your own country?

“Yes, it has. Also, the people around me changed my view of the Czech Republic. I have to say that the older I am, the more I like coming back and I appreciate everything that’s going on here. I have my family here, and there’s a lot of guys in the NHL who stay there throughout the year and through the summer; I would have a hard time not coming home. I appreciate everything here – my parents, coaching, the school. The history that we have here – I have now lived in Prague for four years, and I just love seeing all kinds of things I had not seen before.”

You can find more about Patrik Eliáš at his website, www.eliaspatrik.com.