How the army became a “workshop” for cinema during communism

František Vláčil, Karel Kachyňa, Vojtěch Jasný, Jiří Menzel and several more of the greatest ever Czech film directors honed their craft in the army during the communist period. And as the Czechoslovak New Wave was blossoming, the country’s military were producing the kind of short films that were the envy of their counterparts elsewhere in the Eastern Bloc. That’s according to historian Alice Lovejoy, author of the book Army Film and the Avant Garde. We spoke when Lovejoy, who teaches at the University of Minnesota, was in Prague recently. 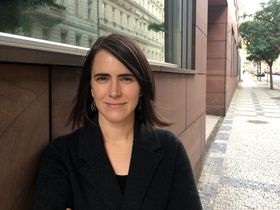 Alice Lovejoy, photo: Ian Willoughby “There were a number of different kinds of films.

“There were instructional films. There were films that were termed ‘propaganda’, which is a category that encompassed documentary films and scientific films and other kinds of broadly non-fictional productions.

“But there were also fictional productions that were made by the studio.

“For the most part, all the films were short, which is to say about 10 to 13 minutes, but there were a couple of feature films also made by the studio over the course of its existence.

“And then of course there were news reels, which were produced at various times and in various ways.”

As for the films, who were they intended for? Were they for a general audience, or just soldiers?

“They were primarily intended for soldiers.

“That means that for the most part the films were shown in barracks classrooms and cinemas on military bases and in a series of military-owned cinemas in larger cities in Czechoslovakia.

“But a number of them were also shown to civilians.

“This was on one hand when they were shown as short films preceding a feature film. Many of them – especially in the 1960s – were shown at festivals, both domestically and internationally.

“And then, especially later on, you see many of them being shown on television, as well.”

So they must have had pretty high production standards, if they were being shown at festivals or on TV?

“One might imagine that it would be the kind of work that would only serve the purpose for which it was destined, whether that was to teach somebody to put together a kind of gun or to teach them not to betray their wife when they were on weekend leave.

“Some filmmakers would say that Army Film was for them really a critical pedagogical moment in their careers.”

“The part of it that’s critical to this is that the studio very much relied on the educational systems around filmmaking that existed in Czechoslovakia at the time.

“So, especially in the 1960s, you see filmmakers completing their studies at FAMU [film school] and going to do their military service in Army Film, where they spent a few years honing their craft in making these short films, and in some cases longer films, that have somewhat limited distribution.

“In this way it really was what one of the critics writing about the studio in the 1960s termed a ‘workshop’ for cinema.”

Could you give us an example of a film of this kind?

“Some of the films that I find the most fascinating are a series of short documentaries, short non-fiction films, that are really better thought of as experimental non-fiction films made in the late 1960s by filmmakers like Ivan Balaďa, cameraman Juraj Šajmovič and a number of other filmmakers that were made around the time of the Prague Spring and especially around the time of Jan Palach’s suicide. 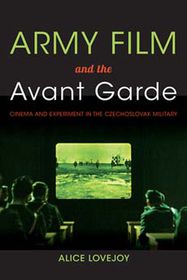 Photo: Indiana University Press “So in them you see the filmmakers using black and white cinematography in ways that really experiment with the use of light and dark, with colour or black and white.

“Consider the ways in which, for instance, in the film Metrum by Ivan Balaďa and Juraj Šajmovič from 1967 the filmmakers are playing with the ways in which the Moscow metro, which is the subject of the film, allows them to create a film that looks a certain way.

“The metro stations that they shoot in have very, very long escalators and Šajmovič’s camera will just follow people up and down the escalators in these sort of beautiful travelling shots.”

The list of directors who passed through the army’s Film Group is kind of amazing. A lot of these people went on to make some of the greatest ever Czechoslovak films: Vojtěch Jasný, Pavel Juráček, Karel Kachyňa, František Vláčil, Jan Němec. How much of their future success can be attributed to their army filmmaking? Was it in a sense their “10,000 hours”?

“Some filmmakers, and here I’m thinking specifically of Vláčil, would say that Army Film was for them really a critical pedagogical moment in their careers.

“Vláčil is important because he didn’t go to FAMU. He was somebody whose training in filmmaking really happened in Army Film. He had studied, I think, art history and other fields before he entered the army.

“So certainly in his case it was a moment in his life that set him up for the work that he would end up doing at Barrandov making feature films, even to the point where you see certain short films that he made in the 1950s in Army Film as sketches for his feature films that would happen later.

“We can see this in his film Glass Skies, Sklenéná oblaka, which was a film that he made in the army right before he left. And when he got to Barrandov he made The White Dove, Holubice, which is a film that plays with the same themes and images that he developed in the short film in the army.

“So Vláčil’s a great example of that.

“Some filmmakers, especially those who served in the early ‘50s, have a different memory of the studio.

“Some, but not all of them, remember it as being a place where they were really making films to order.

“This is in the era when Alexej Čepička was the minister of defence. Čepička was known for both his close ties to the Communist Party, of course, but also to Gottwald himself. He was married to Gottwald’s daughter.

“So there are really differing experiences. But I think by and large it was a way for filmmakers to spend their years in the army, honing their craft, and in almost all cases, I think, you do see links between the work filmmakers were making in the army and the work they would make later, whether that’s stylistically, or thematically or otherwise.”

Some of the directors who are known today for being part of the Czechoslovak New Wave were also in the army’s Film Group, like Němec and Juráček. What about the others who are really well-known today, like Miloš Forman, [Jiří] Menzel and Ivan Passer – were they also in the Film Group?

“Menzel was certainly in the Army Film studio. He made or was involved in a number of short films and newsreel pieces in the ‘60s.

“He also appeared as an actor in some of the army films.”

Was there a golden age of the army’s film production?

“We can think of this a golden age for the same reasons that the Czechoslovak New Wave took shape in that period, and that is that there were a number of talented filmmakers who had come through FAMU and were very skilled at their craft. Vladimír Menšík in 'Crooked Mirror', photo: archive of Military History Institute Prague “These were filmmakers who were watching world cinema as it existed at this moment.

“But it’s a moment, as we know, when censorship was lessened and abolished, briefly.

“So I think all of the same social, political and creative forces that we see converging to create the Czechoslovak New Wave also create that in the army.

“But what’s important to note is that it goes further in the army than it does elsewhere.

“And the reasons for this are that the army is a protected sphere.

“The filmmakers that are making films in the army aren’t expecting that the films will be shown as widely as films that one might make for Czechoslovak State Film, whether in the Short Film studio or for the feature film production.”

So they weren’t using self-censorship in that case, were they not?

“Self-censorship probably exists always, in all forms, but the censorship systems in the studio itself were very different than they were elsewhere.

“What’s happening in the 1960s is that there is top-down censorship happening really only at the end, when films are finished.

“As I understand it from oral histories that I’ve done with filmmakers involved with the studios, at that point many censors just let things pass.”

Some of these filmmakers are still around, like Vojtěch Jasný or Karel Vachek – did you have a chance to speak to them about their experiences?

“I did. I was lucky to have the chance to interview a number of filmmakers who worked in the studio and they were very gracious in agreeing to speak with me about their experiences.

“I spoke with Mr. Vachek, Mr. Jasný, Ladislav Helge, Jan Schmidt and with a number of others: cameramen, editors, directors.”

“Some might see this focus on experimental filmmaking, or experiments in filmmaking, in the army as a kind of švejkish behaviour.”

Typically what were their memories of that phase of their career?

“It varies. Some people have fairly negative memories of their time in the army.

“Especially again Mr. Helge, who served in the early 1950s.

“Others remember it as a period where they were able to practice their craft in a relatively sheltered space.

“I think one of the phrases that I heard the most commonly was that it was better to carry a camera than to carry a gun.”

Did any actors who were well-known or later became well-known appear in the fictional films?

“They did. One of the most amusing examples of this is the 1958 film Crooked Mirror [Křivé zrcadlo] by Karel Kachyňa and Vojtěch Jasný, in which Vladimír Menšík appears as this sort of buffoon of a soldier in a film that is structured as a military fashion show.

“In addition to Menšík we also have Stella Zázvorková, who is the announcer for the fashion show – she’s presenting all of the models that appear.”

Did the Czechoslovak Army Film Studio have parallels in other states, be it in Eastern Europe or in the West?

“Certainly there’s a very long history of intertwining between the military and cinema, in terms of production but also in terms of distribution and other factors.

“In terms of production, one of the best-known examples regionally is in Poland, where the army film group in that country was founded by Aleksander Ford, a very well-known filmmaker, and that’s also a space in which a number of Poland’s renowned filmmakers spent time.

“But I do think that Czechoslovakia was unique and this is something that critics at the time emphasised as well. You’ll have to elaborate a bit please on the Švejk aspect.

“Švejk is a character who appears, indirectly, in a number of army films.

“The best example of this is Crooked Mirror, in which its playing with the švejkish idea of pretending to be loyal but not actually being loyal, to the empire or to the army or otherwise.