Jiřina Šiklová - from sociologist to dissident smuggler to pre-emancipated feminist

My guest today is Jiřina Šiklová, a noted sociologist and author. Born in 1935 in Prague, Šiklová studied history and philosophy at Charles University. As a member of the Czech Communist Party, she became a key voice in the reform efforts that culminated in the Prague Spring. She left the party after the Soviet invasion of August 1968, severely limited in her official career opportunities as a result. As a dissident, she often published under an assumed name, and assisted in the smuggling of literature both to and from the country, for which she was ultimately briefly imprisoned in 1981. Today, she continues in her work as a sociologist, giving university lectures and writing books and articles and often having heated debates with the powers-that-be. Jiřina Šiklová, welcome to the studio. 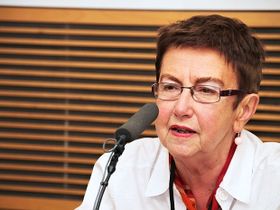 You were born in 1935 in Prague and you’ve seen a lot of Czech history. So what are some of your earliest memories? Do you have any recollections of World War II or the 1948 communist putsch?

“I think that my memories are deeper. I remember the [anti-German] mobilization of 1938 and how my father took our family away from Prague. And later I remember how it was during the time of ‘Heydrichiáda’ [a period of repression following the assassination of Nazi Bohemian Protector Reinhard Heydrich in 1942] and that I didn’t really understand what was happening, but I saw this atmosphere, which was very complicated and my parents had this sense of great fear and were engaged in great discussions. And to see and hear one’s parents being so tense, it has an emotional impact on the children.”

“I was in Prague during the uprising of 1945. From the time I was born, I mostly lived in the same place in an apartment in Prague’s Klimentská Street.”

So as you were growing up, did you gradually become more and more aware politically of what was going on around you? What was the process of asking questions and wondering whether things were or were not normal?

“I was from a so-called bourgeoisie family, but it is important to explain this: from my point-of-view I was not from a bourgeoisie family because my father was a medical doctor and my mother was a teacher and we were not too rich, but we had a very good standard of living. My father was a member of the Social Democratic Party, which meant that I was very well informed about what was happening on the official level. And I observed the commentary of my parents. For example, my mother was a schoolmate of Milada Horáková [a Czech politician who was executed in 1950 following a notorious show trial]. After she was executed, it was one of the reasons why my mother repeated: ‘Don’t have anything to do with politics! You see what has happened with my friend.’ But, you know, it is complicated. I think that all generations try to find and place their own fingers into the political situation.”

Because obviously you didn’t take your parents advice. You went into Charles University and you did become politically active. So how did that happen? You were a communist at that time and during the reform process that led up to 1968, you were for that wave, even signing a petition that was called ‘Two-thousand Words’. So was that a time of great hope that things could get better? 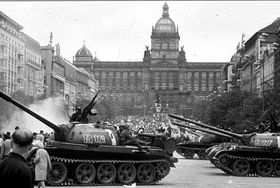 Soviet troops in Prague in August 1968 “I thought – and I do not think I was alone in that – that this was the only solution for how to change the society. For me, there was no other alternative than these so-called communists or socialists. Because I never – and I was a sort of half-adult at the time – had never really experienced a different regime. And I saw that a reform process had started and that there are possibilities here. Secondly, this was after we’d seen a similar process occur in Hungary [crushed by tanks in 1956] and that it started the changes here in the beginning of the 60s. At this time, I was in the Faculty, and the atmosphere there was different. In the 60s, I was a young mother as my children were born at the beginning of the decade, but when the changes started in the mid-60s, then I participated. Not only at the Faculty, but we had also started a so-called high school ‘student committee’ which I think was relatively progressive for the time. I thought that changes were possible and I remember that in the summer of 1967, the writers’ congress was stopped and what was a very famous paper at the time, Literární [Noviny or] Listy, was shut down. For me it was an impulse that it was important to start with some activities and to support the writers that had been dismissed. So then I started to not only be a member of the communist party, but at the beginning of 1968, I was the head of one organisation at the Philosophical Faculty.”

And then the Soviet invasion came and in 1969 you left the party and you suddenly found yourself being punished for being a reformer. You were unable to get work, to study. So how did that feel – the sudden realisation that potentially your career is over or that you are now a dissident?

“I thought that those were simply the consequences. Not only the people that participated in these changes were punished, but two or three hundred other people in the Philosophical Faculty were also dismissed. And I am proud that I was dismissed in the first group of ten – and I was in very good company I can tell you, with Jan Patočka, Karel Kosík, Milan Machovec etcetera. And I thought: ‘Yes, it is OK. It is normal. If you are doing something against somebody, then it is normal that you will be punished.’ And for me, it was not a tragedy.”

Even though you couldn’t get work and were having to work as a cleaner?

“I really didn’t view it as a tragedy because no-one knew how long this would go on for. And I thought it would be two or three years, and it ended up being longer. But at this same time the so-called ‘parallel society’ started, or you could also call it the ‘dissident society.’ ”

So in the ensuing normalisation years, you were a smuggler of books, smuggling items both to and from the West; writing sometimes under an assumed name. Were those times of hopelessness or hope?

“I think that those were times of hope and I thought to myself that it was very important that culture is saved to help the people survive. And I saw that I had the ability – though obviously not the qualifications – to act like a spy and undertake covert organisational activities. This gave me great satisfaction, to see how many books and manuscripts were smuggled abroad and how so many articles were published abroad. And I think that this evoked a new ability in these authors to write. I think it was twenty years in which I survived very well.”

So now in the post-Revolution Czech Republic, are you sometimes sorry that the younger generation don’t remember the wisdom that came from suffering or do you think that it is better that they don’t have any memories of the past? 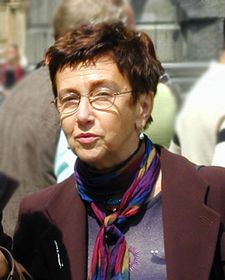 Jiřina Šiklová “I thought that people’s memories would last longer. But for young people this is normal, isn’t it? If I remember how my parents used to talk about the Austro-Hungarian Empire and a daily repetition of how people lived back then. Of course, it is all just connected to the period that one grew up in.”

If we can briefly examine some of your work as a sociologist: you established Gender Studies in this country and you also have a rather unique perspective on feminism, which is not the typical feminism. I spoke to somebody who was surprised that you turned up somewhere as a feminist fully made-up, very attractively dressed. And they said: ‘That’s a feminist? Interesting.’ So tell me about your views on feminism.

“That is a very good question. Yes, I know that these views are atypical. But you need to understand that we had plenty of emancipation from above. It was organised. Here, there was a duty to work. In fact, it was not only a duty but really the only possibility. It was normal for us and our women had different experiences than the women from the West. And when these Western European and American feminists arrived in the country, we could see that we were different here.”

Jiřina Šiklová, it’s been an absolute pleasure. Thank you very much for joining us. 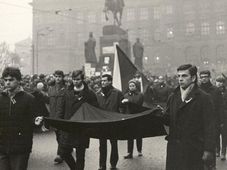 Fifty years ago on January 16, a young Czech university student named Jan Palach doused himself in petrol and set himself alight at… 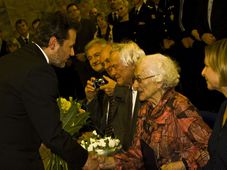 Jaroslava Doležalová - a story of bravery and inequality

Jaroslava Doležalová has become an honorary citizen of her home town Žďár nad Sázavou. She hid a little Jewish girl during WW II and probably… 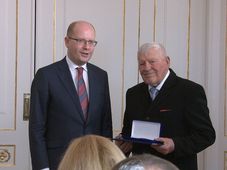 Kramářova vila is the official residence of the Czech prime minister, currently Bohuslav Sobotka. I’m at a reception at the villa in…