Julek Neumann – son of the stage

Julek Neumann is currently appearing at Prague’s Divadlo Ypsilon in a Mark Twain play which he himself translated into Czech. The new production marks his return to the theatre’s stage after a gap of nearly two and a half decades. In between he lived in Vienna and then London, where he worked for the Czech section of the BBC World Service during what was a period of change. When I met Julek Neumann in a café in Dejvice the other evening he first told me a little about his family background.

Tell us where you got your unusual name – at least to me the name Julek is a new one.

“It’s pretty common in Poland, it’s not as common in the Czech Republic – Julek is short for Julius…”

You told me earlier that your parents had named you after some top communist.

“I wouldn’t say top communist – he was one of the communist journalists from before the second world war. My mother and her father were sharing an apartment with him. His name was Julius Fučík; he was executed by the Nazis and was made into a kind of hero-legend after the war.”

You studied acting – what drew you to the theatre?

“As far as I can remember I was always somehow connected to the theatre. It probably started when my grandfather, who was a National Theatre actor and quite well known from movies, took me to matinees on Saturdays and Sundays – it was a kind of baby-sitting. He put me on one or other side, in the wings of the theatre, and I watched all the classical repertoire, all the plays.

“I didn’t really mind what I was watching but it was a very fascinating world, especially because as a child I couldn’t tell apart what was reality and what was on stage. I saw the stage hands changing the set between scenes, but after when the scene started I was still wondering how come there were trees on stage, how could they grow so quickly.”

Your first engagement as an actor wasn’t in Prague but in Liberec, I believe.

“Yes, my first professional job was at a small theatre, quite unusual at that time and quite unusual for the theatre system of the ‘70s. It’s called Ypsilon, it still exists, it’s now in Prague rather than Liberec and it became a kind of home theatre to me when I was coming back to Prague.”

I guess this would have been in the mid 1980s, you left Czechoslovakia and ended up in England, but via Austria.

“Yes, I left in 1984 after Christmas, after a show – I played a show and the next day I just took a train to Vienna, where I stayed for four years…”

“Firstly, my mother was living there. Secondly, Austria was a country which then offered political asylum to people connected with Charter 77…”

Were you connected with Charter 77?

“I wasn’t a signatory of Charter 77, but my mother was and I was working and in touch with other people who were working for it. Actually, my not being a signatory was an advantage at that stage.”

What was the immediate impulse behind your departure from Czechoslovakia?

“My mother left four years earlier and all the attention she was getting from the secret police was transferred to me. The pressure was getting less and less bearable, and I was at the point where I really couldn’t bear it anymore.”

How did you then end up in the UK, in London?

“We had these American friends in Vienna and they called me once and said, there is an advert in The Economist for a post at the Czech section of the BBC External Services, which later became the World Service. So I applied and it took about nine or 10 months of vetting and different interviews, but I got the job and I went to London to work for the BBC.”

Was that an enjoyable experience? I’ve spoken to a few people who worked for the Czech BBC at different times and they all speak about it fondly.

“It was definitely a fun experience, it was an experience of very interesting times at the BBC – the BBC was changing, the world around the BBC was changing. Especially, the initial phase, when you had the feeling you were doing something quite important for the country, giving information that was terribly lacking at that stage…Then after 1989 obviously the times changed.

“There were plenty of very interesting people working there, including people who worked for the BBC in the ‘40s, when the Czechoslovak section started. There was Ivan Jelínek, the poet. There was Karel Brušák, who was an ironic professor of the Czech language at Cambridge University. He was a very witty person, with a wicked sense of humour. When he thought a news reader was reading too slowly he just lit a match and put it down on his script so that he had to finish reading it faster.”

What was the impact of the changes here in ’89 on your work at the BBC?

“Basically, there was a big change in BBC internal policy of hiring staff. And the system of work changed from a more or less translation/news-reading service into proper journalism, interviewing people, doing more personal stuff, going out and talking to people, writing dispatches and so on.”

That’s a few years ago now. About one year ago you moved back here to Prague – how has that experience been?

“You have the feeling that you are coming back and you meet the same people, but obviously they have changed and I have changed…”

And after more than 20 years away, after a year back here do you think you have kind of…readjusted to Prague?

“I think it will take much longer than that. I think for moving from one country to another it takes about two years to adjust to the country…You still have that feeling that there is a possibility of going away somewhere else, or going back, even if it’s an illusion. But there is probably some cut-off point, when you say, OK, now I’ll probably stay here for good. And that hasn’t arrived yet.”

What has arrived is your return to the stage – for the first time in a long time you’re now acting again.

“It’s after 24 years, almost to the day. I was in the opening in December of a Mark Twain play called Is he Dead? Strangely enough, it’s the same group, Ypsilon, it’s the same way of rehearsing, I would almost say the same people, the same strange notions of theatre. It feels quite pleasant to be there with these people and to be on stage again. I don’t know how well it comes across, but it’s good fun.” When the theatre play Jeffrey Bernard Is Unwell by the British author Keith Waterhouse opened in Prague in March 2009, it became an… 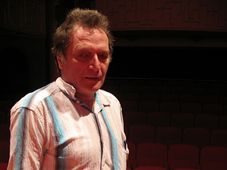 From Daruvar to Vancouver: Czechs tread the boards on five continents

Julek Neumann is a man of many talents: theatrical director, actor, journalist, playwright and poet. He is currently writing, directing… 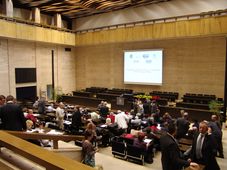 Czechs living abroad and their descendants are currently meeting in Prague for a three-day conference. The 120 delegates from 16 adopted…