Martin Kříž had the “painful experience” of growing up as a mixed-race child in more or less mono-cultural pre-1989 Prague. Now in his 40s, he is helping today’s black Czech children through a new organisation called Čokoládové děti, Chocolate Children. However, Kříž’s main activity is teaching and translating Chinese, as well as helping Czech firms do business in China.

When we met recently, he explained that his father had been a student from Africa who separated from his mother when he was still a small child, leaving him to experience a typical Czech upbringing.

“My step-father was a Czech-born Czech, and my sister who was born from a second marriage is Czech, so I had a one-hundred-percent [Czech] influence since I was two or three years old. So practically no relations with Africa.”

At what age did you begin to feel different?

“It was when I was six or seven. I remember I was looking into the mirror and saw that my hair was slightly different from the hair of the other kids at school. Then I asked my grandmother, granny, why is my hair different? She said, oh, it doesn’t matter, I remember that your mother also had this kind of curly hair. But as you grow older it will be different, and even if kids at school call you nigger or whatever, don’t take it personally…it will change as you get older.

“That was the first time. The second time was at the age of 17 or 18. I had a serious relationship with a girl and it wasn’t very well regarded in her family. The girl’s father was against the idea of his daughter meeting somebody who had a different skin colour. So these two moments were not really pleasant for a young man.

“But shortly afterwards at university I was in St Petersburg in Russia and in the dorm we had 35 or 40 nationalities from around the globe, so I started to feel good in an international environment.

“And as I returned to the Czech Republic, being in Prague, Prague now is quite an international city. But I can still imagine living in small villages or in the suburbs of small cities it could still be a painful experience. But in big cities, especially among educated people, there is absolutely no problem being different.”

About your academic career – you mentioned studying in St Petersburg – what led you to study Chinese?

“It wasn’t that long ago, it was after 1999. After I finished [at Prague’s] University of Economics I was interested in Tai Chi and Chinese philosophy. I started to be more and more interested in that interesting culture and took some classes at evening school.

“But it became more and more complicated and I felt it’d be a waste of time if I stopped after that, so finally I took a supplementary year and finally ended up at Charles University’s Sinology Department.”

Beijing, China Even 10 years ago China wasn’t the big world power that it is today. It was a big country but it wasn’t such a big player on the international scene. Did you foresee that China could emerge as it has done?

“Absolutely not. It was different. In 1999 China was a slightly developing agricultural country. When we arrived in Beijing it only had its old airport, which was ten times smaller than it is now.

“At that time you saw more cyclists on the streets than motorbikes or cars. We had absolutely no idea that 10 years later China would be even with the United States and they would have talks on a similar platform. It was absolutely not the case.

“We were more interested in Chinese calligraphy, philosophy, about culture, than in economics. Well, six years later, when people asked me to interpret business meetings for them, it paid off very well. Ten years later it has become quite an interesting profession to be an interpreter from Chinese to Czech. And now I work mostly for big companies establishing businesses in China and as a court translator, court interpreter…It keeps me pretty busy.”

How do you see China developing in another 10 or 20 years? Will it remain an essentially capitalist state with severe repression?

“As people think in China, when Hong Kong became part of mainland China we thought that a bit of the democracy could change the whole picture of China. Well, just the opposite was true – mainland China had more influence Hong Kong than the other way around.

“China is not ready to have a huge middle class which can influence civic society. So probably 10 years from now maybe there will be more Chinese investments in the US, in Europe, especially in South America or Africa.

“But from the political point of view there won’t be as many changes as in the 1980s, when China became a world player. So the changes will definitely not be that huge.”

If we can get back please to the issue of race, you set up an organisation called Čokoládové děti, or Chocolate Children. What is that?

“Well, it has absolutely nothing to do with China. It is something which we experienced 20 years ago…people who had a different skin colour but the same painful experience of being different.

“We were meeting two or three years ago and forever discussing, is there anything we can do for such kids, and the answer was that situation, especially in big cities, is not the same as 20 years ago, and being different is rather an advantage. 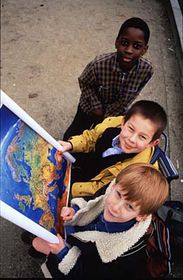 Photo: European Commission “But there are still kids in different environments, especially in orphanages or outside Prague, they still need to feel some strong network, that they are not on their own but have somebody they can talk to and share some difficulties that they have in their lives. That’s why we set up a public…”

An NGO, I suppose.

“Yeah, it’s an NGO…Two or three weeks ago we started to communicate with orphanages all around the country. We are trying to locate the places where the bi-racial kids are.