Going by the name Pivní Filosof, or the Beer Philosopher, Max Bahnson blogs in English and Spanish about all aspects of Czech pivo and beer culture. The Argentinean, who has little time for those who look down on popular, mass-produced brews, has written a guide to Prague’s pubs and is currently working on a second book. 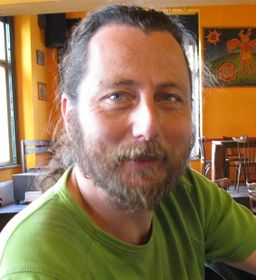 Max Bahnson, photo: archive of Radio Prague When Bahnson stopped by at Radio Prague’s studios, I asked him what had led him to the city in the first place.

“I’m from Buenos Aries, Argentina, and it was chance that brought me here. I was planning a trip to Egypt and in order to get to Cairo, I had to come through Europe, and I decided to visit another city.

“I chose Prague, and I liked it. I was lucky enough to be able to find a job, so I decided to move.”

Before you moved here had you always had an interest in beer?

“Yes, but as a drinker. Whenever I travelled I tried to drink as many different brands as possible. But it was just like a collector thing.

“But it was here that I started to get interested in beer as a beverage – not just different brands.”

Was there one breakthrough moment for you in your beer drinking here?

“Yes, I was, it must be eight years ago, at a now disappeared pub at Letná called Svijanský Rytíř, where I had my first Svijany – and it blew my mind.

“I started getting interested in it. And shortly afterwards I started to work with a client whose offices were next door to the [specialist beer shop] Pivní galerie. So my routine was going to the client, then going for a beer there and buying something every time.

“I would look at it and pay attention to it and started exploring. Then one thing led to another and I started writing.” Photo: Barbora Kmentová Generally speaking, how good is Czech beer? Is it as good as Czech people seem to think that it is?

“I think it is. Of all the countries I’ve been in, the standards here are the highest.

“A friend of mine said that one should not judge the beer of country in general by its best beer, but by its worst beer. And the worst beers here are much better than the worst beers elsewhere.”

You write a blog about beer. What do you find are the aspects of Czech beer that your readers are most interested in?

“Many people here like the beer culture, the pubs. The beer scene is really, really vital now. It’s incredible.

“People are interested in knowing what’s going on here, about the new pubs, the new brew pubs, breweries. I think it’s the overall scene, the culture that people are most interested in.”

And the trend now is for pubs with more beers, a choice of beers? In the past, most pubs only sold one.

“Yes, that’s true. What I like the most about the local scene is that you still have great traditional pubs that sell one or two brands, and they do them really well.

“But now also you have a growing number of pubs that are expanding their offer. They try to do a good job – some of them better than others.

“But this new trend has not overwhelmed tradition. Both things coexist in peace.”

Why do you think the new trend has come about? Why are Czechs now going more and more to pubs where they have a broader selection? 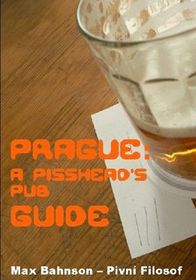 “Because they realise that Czech beer is not only Pilsner Urquell. They realise that there’s a lot more. And the smaller breweries have improved their game at showing themselves.

“I think to a certain extent the breaking point could be said to have been in 2007 or ’08. Even though I’m not a big fan of the event, perhaps the Czech Beer Festival has contributed to that. I remember the first edition, where they still had the big brands, but everybody was drinking the smaller brands.

“I’m sure many people realised, what is Platan? What is that? And they started looking for it.”

What do you think of the standard of Czech pubs? Because I have to say I love Czech beer, but coming from Ireland I find the pubs quite basic, generally.

“I like the traditional pub. I like that you can go into a pub, take a seat and you get a beer. If you go to a good traditional pub, that beer will be well taken care of, well served. There’s no nonsense, no thrills.

“One thing that sets Prague, and probably the Czech Republic in general, apart is that I know I can walk into pretty much any pub, anywhere in the city, take a seat, and I will not get into any trouble if I behave...”

“It’s more laid back. I think people go to pubs and mind their own business, for the most part...”

I saw on your blog that you used a word that I hadn’t seen before, craftophile, for people who are committed aficionados of craft beers. I get the impression you’re not 100 percent in favour of these craftophiles and that you don’t like people who look down on mainstream, mass-produced beers. 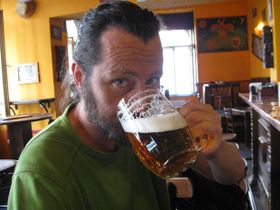 Max Bahnson, photo: archive of Radio Prague “Yes, I don’t like the attitude. I don’t like the discourse of these people. I think there’s a certain group of people – it’s not such a strong thing here, but it is in other countries – that have a religious fervour for certain kinds of beers.

“They believe that the companies that make those beers don’t do it for money, they do it for the love of beer. It’s incredible how gullible they are. They would believe anything that the brewer tells them, because it’s craft, and craft is better.

“I realised over time that craft beer is a brand. It’s like premium. It’s just a brand. And that doesn’t guarantee quality.”

“Well, because the language I use is the language that people use at pubs. I don’t save on swearing and I make what today some people would consider politically incorrect jokes. Because that’s the way people speak in pubs.

“The book is divided into pub crawls. It’s not a traditional guide in the sense that it’s not a list of pubs. It takes the reader through neighbourhoods and I tell stories, anecdotes that I remember, or curious things in the city, from my point of view.”

Is Prague a good place for a pub crawl? A lot of the pubs probably wouldn’t welcome big groups coming in for a short time.

“You’re right there. I tried to make the book for people who travel in ones or twos. I think for that sort of thing it’s good. Because there are neighbourhoods where you get pubs every 20 metres or so, so it’s very easy to do pub crawls.

“Personally, I have to confess I’m not a pub crawl sort of person. I prefer to go to a pub and sit and have a few beers and then go home. But I chose the pub crawl structure because it allowed me to have a more interesting narrative.”

I understand you’re also writing a new book. What’s the focus of it? Photo: archive of Radio Prague “It’s a rant. It’s a probably 40,000 word long rant that I’m writing with a Canadian beer blogger Alan McLeod. We are basically criticising the beer discourse, which I was talking about before – the craft beer and the craftophiles.

“We are trying to do it with a bit of a sense of humour and some surrealism. We’re just getting a few things off our chests.”

Our listeners will definitely want to what your favourite Czech beer is. If I put a gun to your head and said you had to name one, what would it be?

I would go for the same one. I love it. I’d never heard of it say two years ago, but now it’s everywhere.

“The brewery will be two years now in June. I’ve got to know the owners and these people are very, very smart in the way they’re running their business. Which sometimes doesn’t get enough credit when we talk about small breweries.

“But mostly I like it because their beers are great. I live not far from Únětice, so for me going to the brewery is a nice day out with the family.”

What about a favourite pub or pubs in Prague?

“My favourite pub is Zlý Časy. That’s my local. But I move around the city a lot and I have watering stations, let’s call them, in pretty much every neighbourhood.”