Jantar Publishing is a London-based press that brings translated titles from Central and Eastern Europe to a broader international audience. So far all of its releases have been Czech, ranging from Karel Jaromir Erben’s classic 19th century poem Kytice (The Bouquet) to a novel by Michal Viewegh that was a huge hit in the original. The man behind Jantar Publishing is Michael Tate, an Englishman who has in the past lived in Prague. When we met at the British Library last month, I asked Tate what had led him to launch the company five or six years ago. 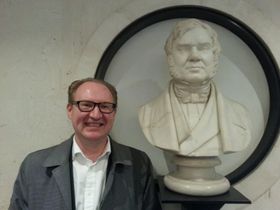 Michael Tate, photo: Ian Willoughby “It started out as a gift for [academic and translator] David Short. I was a mature student, studying for a degree in Czech with Slovak at UCL.

“Towards the end of my studies I was given a Czech-English bilingual text by David, who was my Czech language tutor.

“It was The Angel-Maker by Michal Mareš and I wanted to turn into a book and give him it as a present. Because, quite frankly, he deserved it, in my opinion.

“To cut a very long story short, one thing led to another. I found out a lot about printing, copyright and other associated things to do with printing. I graduated finally in 2010 and Jantar Publishing was formed later that year.

“In the end our first two texts were translated by David Short and published in 2011.”

Where does the name Jantar come from?

“Well, the honest truth is I couldn’t think of a name that I liked [laughs].

“I had the idea that the company would only publish important literary fiction from Central Europe that had been neglected by other publishers.

“The influence of David really can’t be underestimated during this time. He had the more creative and wistful notion that the company was publishing texts trapped in amber. And jantar is Czech for amber.”

You’re a small organisation. I expect it’s a kind of one-man-band – am I right?

“No. I’m the focal point, that’s true. But there’s a large band of people involved in the design and the PR and the translation, as you’d imagine.”

But still you don’t bring out so many titles a year, and when you do I’m sure it’s a major undertaking. On what basis do you select the titles that you go with?

“At the beginning, we had this idea that it’d be for the whole region and that it would be fiction, non-fiction, poetry and kind of anything else.

“But we never got round to non-fiction and we’re just not going to. 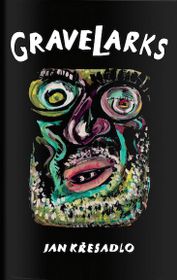 Photo: Jantar Publishing “We also got distracted by Czech literature. It has been easiest for us to get involved with.

“But again it does take a huge amount of time to actually publish anything.

“So [in 2016] we’re going to be in a position to publish our first Slovak novella and our first Hungarian text. And then Poland will probably come around in 2017 or 2018.”

And is it the case that you do a mix of older titles and books previously unpublished in English?

“Yes. The short answer would be yes.”

An earlier generation of Czech writers had a much bigger profile internationally than the current crop. Is it hard to market this stuff?

“In a word, yes. In the recent past, say between 1950 and the start of the 1990s, internationally Czech authors’ politics was more important than the stories they wrote.

“In my view, now it should be easier. However, it’s still a hard sell [laughs].

“French, German, Italian, Czech, Polish, Slovak, Hungarian authors are merely a small part of the literary world and must compete for attention.”

Does Jantar Publishing have a kind of steady stable of translators?

“We don’t have a stable of translators but we know a lot of them, for obvious reasons.

“It takes such a long time to get a book translated, edited, proofed, designed, laid-out and printed that it might appear right now that we only ever use four translators, because that’s all we’ve ever used.

“But if I count them up – and I was counting them up earlier – at the moment we’re involved with 11 different translators on projects right now for publication. And no doubt we’ll work with many more in the future.” Photo: Jantar Publishing I was interested to note that one of your books, Gravelarks by Jan Křesadlo [the nom de plume of Václav Jaroslav Karel Pinkava] was translated by his own son [Václav Pinkava].

“To be honest, I’m not sure that anybody else could have done it. We’re talking about a text that contains passages in Ancient Greek, Latin, Sudeten German, Slovak, Roma, Russian – and I’m sure I’ve missed out a language.”

So is it like a kind of Czech Finnegan’s Wake?

“I’ve never thought of it in that way, but I think that would be fair… it’s an absolute monster challenge to translate. And quite frankly I don’t think anybody else would have attempted it.”

My impression is that Václav Pinkava is a master translator.

“Oh, absolutely. I can’t say speak of him highly enough. He is incredibly talented and really only translates stuff that’s difficult.

“You would be quite surprised by the things he won’t look at, because it’s just too easy. He translates Shakespeare’s sonnets and things like that, just for fun.”

Of all the titles you’ve brought out so far, which have been the biggest successes, either commercially or in terms of the attention that they’ve received?

“There is one that’s been commercially successful and received a huge amount of attention internationally and that is Kytice, translated by Susan Reynolds.

“It’s taken on a life of its own. It’s gone beyond anything I could hope for.

“First it got reviewed by the Times Literary Supplement; I didn’t push it, it just happened.

“Then what was a young and up-and-coming writer named Helen Oyeyemi described it as the best book she’d ever read in the culture section of the New York Times. Strangely that had an impact on sales!

“Then Susan got invited to the Prague Book Fair and ended up giving six readings and appearing on Czech TV twice in three days.” 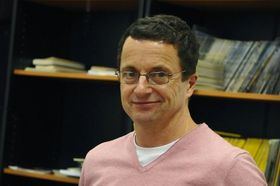 Michal Viewegh, photo: Tomáš Vodňanský “It’s a bilingual edition. It actually sells more in the Czech Republic than it does in the UK. But it sells very strongly in the US – it’s our first big US thing.

“We’re actually preparing a third edition which will have translated into English some notes written by the poet.”

Tell us about your most recent release by Michal Viewegh, who I guess is the best-selling contemporary Czech writer.

“But this [Bliss it Was in Bohemia, in the original Báječná léta pod psa] was his first big success and in many ways became a template for how the post-1989 generation dealt with the period from 1968 to 1989.

“But also David Short’s translation has made it very accessible to our notional, non-specialist, international English reader.”

Given that Viewegh is such a big seller in the Czech Republic, are you hoping for commercial success here with that book?

“Absolutely. Not just here but internationally. We have the English-language rights for the whole world.

“But I also think that people need to consider what the translation is. It’s not a Czech thing any more – it’s an English translation.

“Viewegh is incredibly popular in the Czech Republic but he is unknown to an English reader.

“He’s also very popular in Germany, which has been used by other publishers as an indicator of possible popularity in the English-speaking world.”

My final question is, what does the future hold for Jantar Publishing?

“Well [laughs]. I’m really looking forward to [2016]. We’re going to publish our first Slovak novella, In the Name of the Father by the Hungarian-Slovak author [Vladimír] Balla. 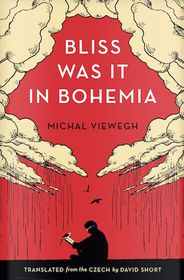 Photo: Jantar Publishing “It actually presents a bit of a marketing problem because it’s a bit of a dark comedy and a horror story at the same time. I personally find it very funny, which is kind of why we’re publishing it.

“Also I’m very excited about developing Jantar TV, our YouTube channel, into something much larger and involving some advertising-based revenue.

“Rather accidentally we’ve got involved in a rather video and social media concept in the UK, and that looks promising.

“Who knows, Jantar Publishing could be part of something more diverse called Jantar Media. So uvidíme [we shall see], as they say in our favourite part of the world.”